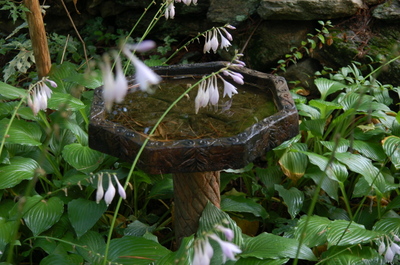 I seem to have collected quite a bit of 'garden whimsy' as Nan over at Gardening Gone Wild has designated the term for those kitschy little collectibles which make a garden unique to the gardener.  The first picture is of a birdbath which I picked up from a customer.  It was slightly damaged and they wanted it out of there!   I think it is  an interesting birdbath and I like the shallow bowl and the fact that the dirt doesn't show with the rust coloration. 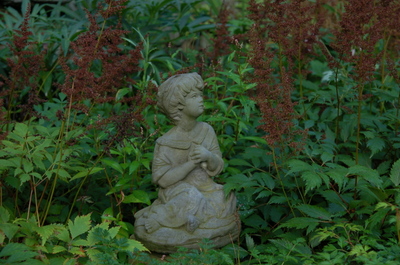 This little statue looks over the astilbe bed.  I think he seems quite at home but he does move around from year to year. 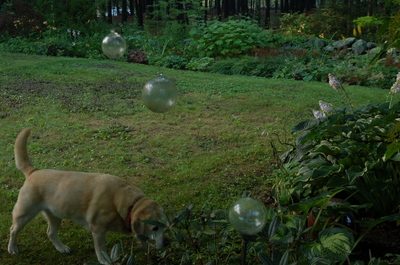 These globes are a lot of fun and actually glow, dimly, in the dark.  One is on a stake and the other two hang  from fishing line over the entry bed.  I like them.  They are bubbles in the garden. 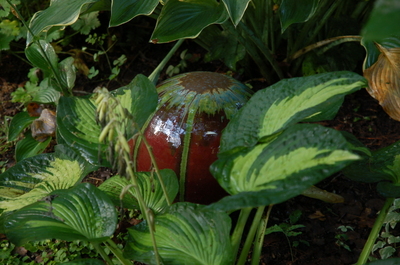 This ceramic globe sits among the 'Great Expectation' hosta leaves giving a bit more color to the shady garden.  Sometimes there is a bit of the 'tongue in cheek' involved with garden whimsy.  Who really wants one of these gnomes 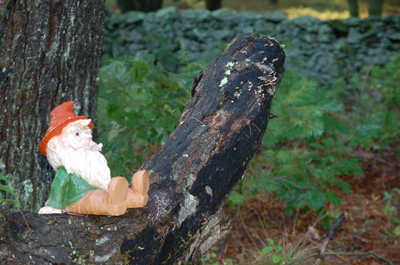 in their garden?   You have to chuckle at the sight of one of these rather garish figures.  I chuckle anyway.  One mustn't take oneself too seriously.  I do consider this birdhouse, 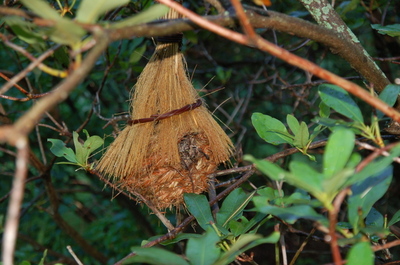 which has housed two families this spring and summer, whimsical in nature.  The thatched roof and overall shape are quite natural looking but must be considered 'artsy'.  I fear for its' sturdiness but it was inexpensive and always makes me smile. 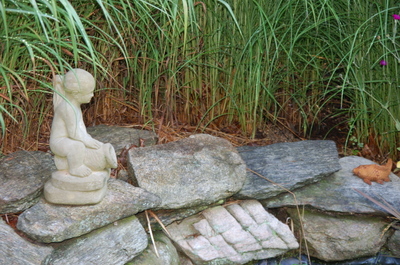 Water girl sits by the fishpond emptying her jug endlessly.  She was given to me several years ago for Mother's Day by my son, Ben.  I love her because she is so patient and she reminds me of my son's thoughtfulness and love. 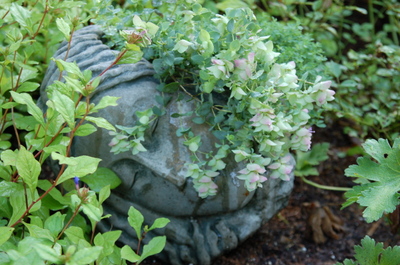 I know I have shown 'Sleeping Maiden'  in past posts but she is serene and bear's a second look.  She weighs in at about sixty pounds.  Lots on her mind, I guess. 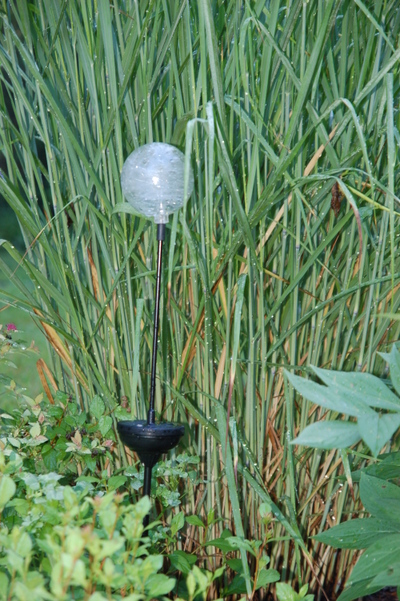 This garden stake doesn't look like much until the lights go out and then it glows red, green, blue, fuschia, turquoise and purple changing every second or so all through the night.  I can see it from my bedroom window and it is better than counting sheep. 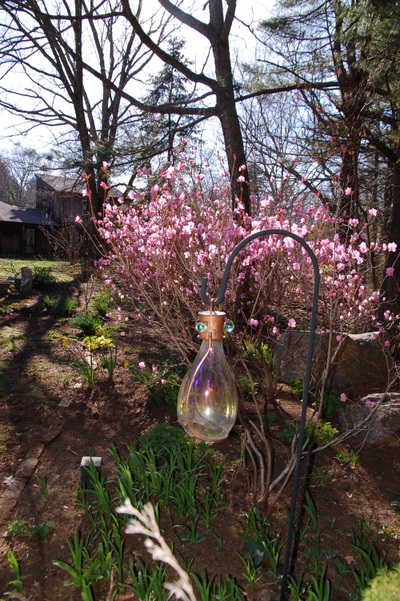 Another hanging globe in the garden but this one hangs from a stake and is also bubble colored.  As you can see, when the Rhododendron mucronulatum 'Cornell Pink' is in bloom the colors match those in the globe. Also, my daughter gave me this globe and I am reminded of her when I look at it. 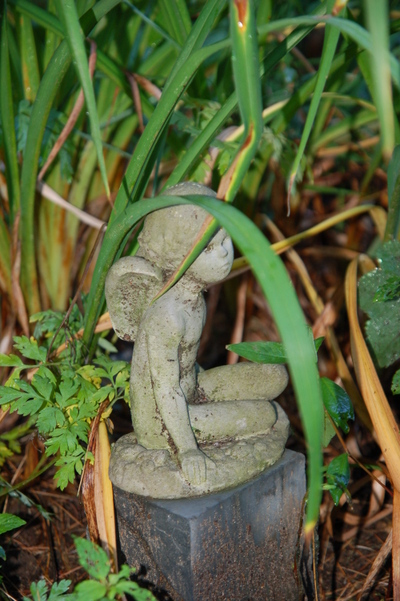 There are fairies in the garden.  Too bad this one is not trained to pull off the brown foliage of these daylilies. 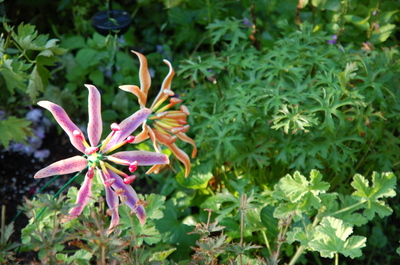 The Lilium plasticus often appear  on bloom day and they do move around the garden with remarkable ease. These are reliable bloomers, never failing to elicit a comment from anyone passing by.  Some may think that I have too much garden whimsy but I do have quite a large area and all the pieces are not within whisper distance from each other.  The squirrel 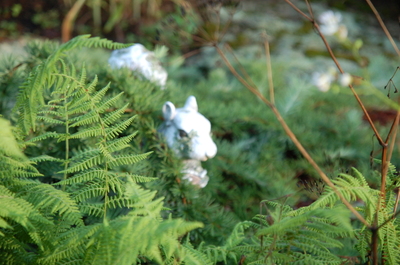 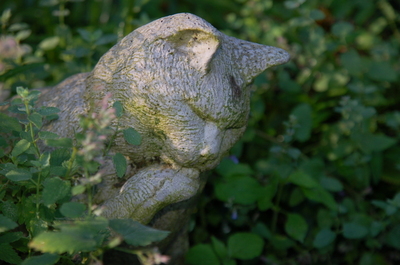 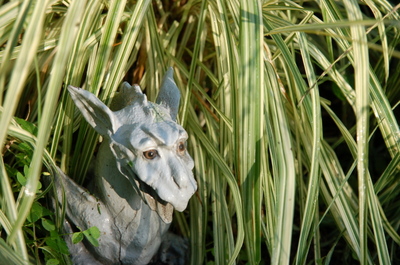 just waiting for a victim.

There are faces I remember! 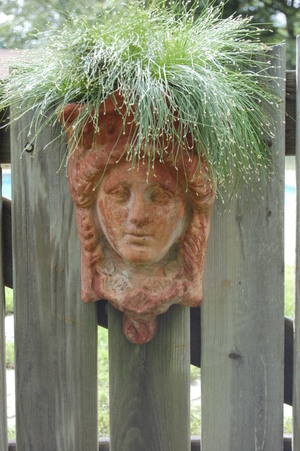 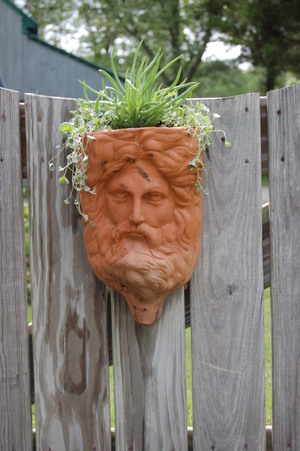 What is it about statuary and statuary with prominent faces?   Some of us have an affinity for the serene face planters, statues and ornaments with faces which are available for garden decor. The pictures above were taken last summer.  Both needed a new wardrobe for this year.  This is Athena goddess of wisdom.  Here she does look quite wise!  She has a head dress of Bacopa and parsley.  I thought it would be good to give her  some food for thought!  Now here, 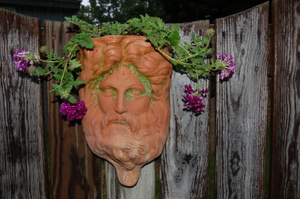 is Zeus , the king of the gods.  He needed a purple robe for his majesty.  In addition, here is the previously shown planter of the sleeping woman. 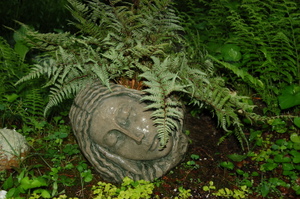 I finally decided on the Athyrium nipponicum pictum 'Ghost' fern to fill her.  She looks a bit ghostly don't you think?  I have this other five face planter which does need re-planting now that the pansies have given up but it is an curious planter.  This  one has one face with a broken nose which is facing toward the back.  The customer wanted it removed so here it is! 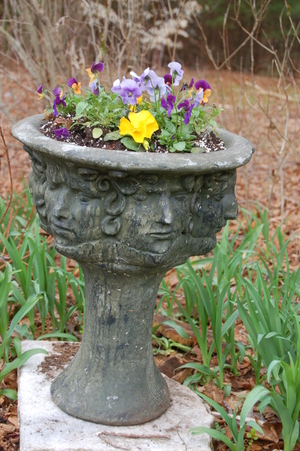 I don't know whose faces are here but it always elicits a comment from those who see it.  Then there is this lovely lady reclining on her Josephine sofa with such a  classic look about her. 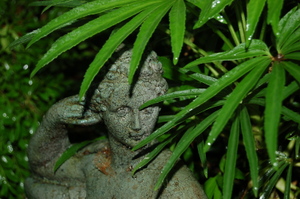 She  begs one to sit down and enjoy the garden but, who has time for that.  The 'native plants' beckon for removal!

Another gardening weekend over!  Three advil just might do it!  I'm still cleaning gardens. Is anyone else done with that task?  A couple more to go and then the weeding ,dividing and planting begins in the perennial beds.   I did plant a few rows of edible pod peas, some  golden chiogga beets, swiss chard and lettuce in the vegetable garden but it looks pretty bare so no pictures yet.  Stay tuned on this one!  I did pull out some statuary and one of my new acquisitions.  Here is a picture and I need your help! 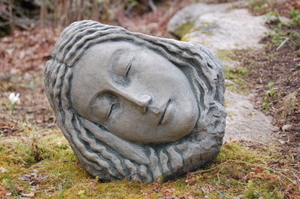 I have to plant her up and I am just not sure what to put in her.  Any thoughts?   She looks so comfortable and at peace.  I will value and appreciate any and all suggestions!