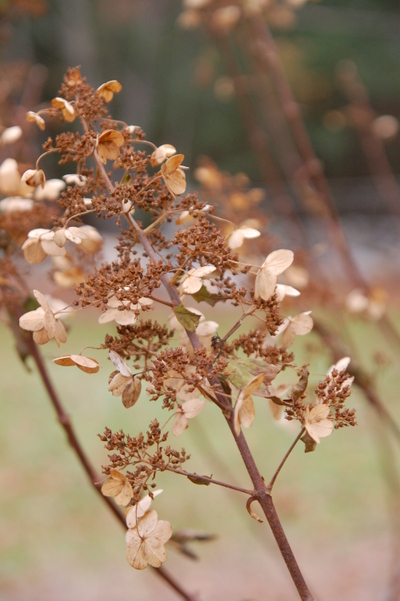 Hydrangea paniculata 'Tardiva' continues to provide interest in the garden.  This is a shrub or small tree which blooms in late summer with a mixed panicle of sterile and open blooms.  In looking through my summer photos, I have a couple of pictures of this flower panicle just as it is opening but I took the picture trying to capture the dragonfly perched on the promising flower head. 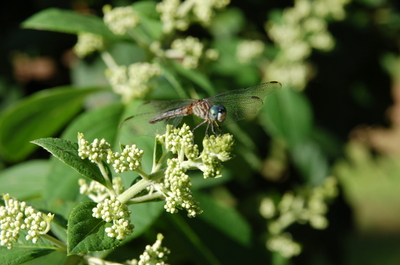 Why didn't I take a picture of the plant in full flower?  I guess one of the reasons is that there is so much to look at in the garden in early August that a cream colored, frothy panicle is just a nice backdrop to the carnival of colors elsewhere.  This shrub is not too particular as to soil type and has the standard recommendation of well drained soil in full sun to partial shade.  Mine is in a fairly dry location in partial shade and it blooms profusely.  Love it!  Do any of you have one of these? 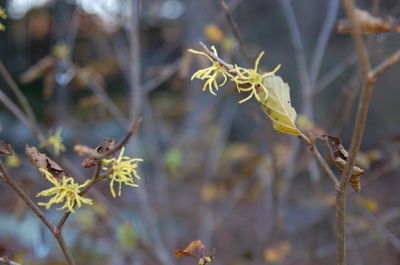 Hamamelis x intermedia 'Arnold Promise'
Thanksgiving Day was a bit of a temperature anomaly here in Rhode Island.   It snowed on the 20th and today was quite cold but yesterday it was 65 degrees F.  Warm enough to force the Hamamelis  x intermedia 'Arnold Promise' into bloom.  This is a small tree which normally blooms in early March in this area.  I will have to enjoy its' blooms now which are welcome even though they are unexpected!  I found another  batch of bloom today on the 'Pink Sheffield' chrysanthemum. 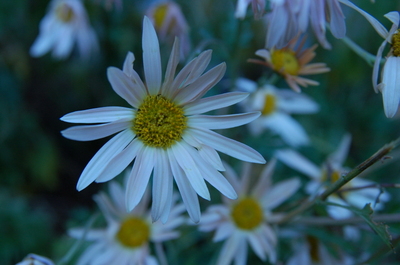 The warmth of yesterday must have pushed the last tight little flower buds.   These were hiding out at the base of the plant where they must have been slightly protected.  The color is a clear peach but with the low light at this time of year the camera had a hard time picking that up.

The walk around the yard yielded another treasure, a bit of bright foliage which has not yet peaked. 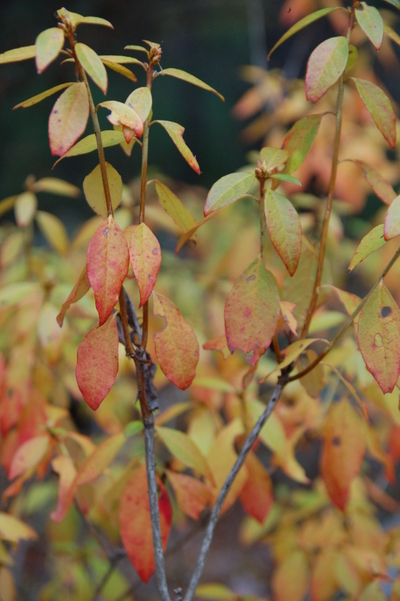 If any of you are looking for a nice transitional shrub for the edge of the garden, 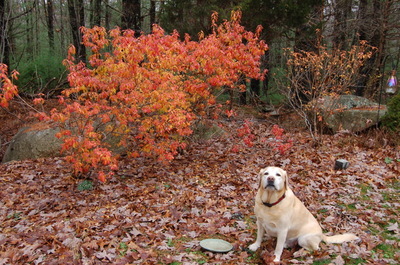 This picture was taken  in late November of 2006!

the Rhododendron mucronulatum 'Cornell Pink' is a great choice for looseness of form, great flowers and wonderful and late fall color. It is hardy to Zone 4 and will grow 6'-10' tall.  I love the clear pink of its' blooms 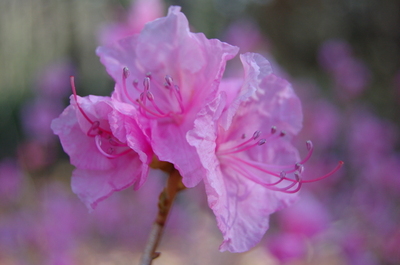 which appeared this year on April 23rd making it one of the earliest of spring bloomers.  This is one of my favorite deciduous Rhododendrons.  It looks very natural although it is native to Japan, Southern China, Manchuria and Korea. 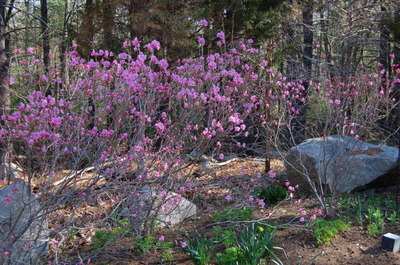 It looks like a native though, doesn't it?   The straight species has much more purple in the flower.  I think the clear pink is more desirable and the cultivar 'Cornell Pink' was introduced in the 1950's.  Are any of you enjoying this shrub in your garden?

Finalist in the Fall color Festival! 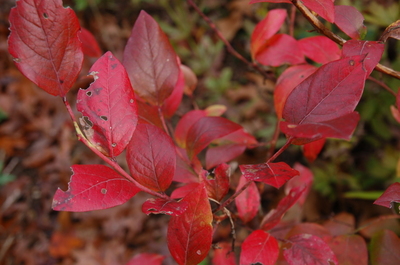 Sometimes we overlook the obvious!  Gardeners are not exempt from this.  With new cultivars of trees, shrubs and perennials being added to our wish lists every year it is tempting to look away from the classics.   Classics are always desirable like that little black dress which is a necessity for the wardrobe, dressing the garden in classics can pay off in a big way.  One of the brightest fall colored shrub in the garden is the highbush blueberry, Vaccinium corymbosum.  It is holding its' leaves now when the trees are pretty much done with their fall shedding.  They are a bright spot of color during the drab days of November.    The fall color is just an added bonus to the berries which are produced, or supposed to be produced, in July.  I say this because I am failing at growing highbush blueberries. 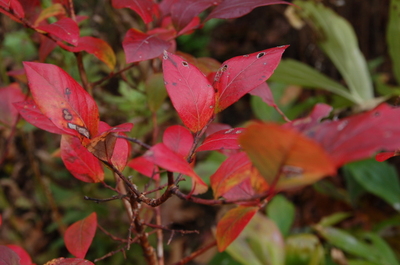 There are many wild ones in the field but the above cultivar has been in the ground for over eight years and is only about three feet tall.  In addition to its' short stature, it produces very few berries.  Perhaps I disturb the roots  when I clean the border where it resides but for whatever reason  these are not thriving in this garden.  At least they have pretty fall color though!   Are any of you having any better luck at growing blueberries? 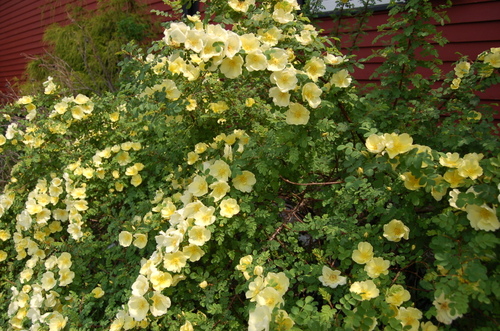 What could be better, on this cold and rainy day, than to re-visit one of the pictures I took this past week.   A sunny yellow one, at that.  I saw my first Fr. Hugo rose in mid-August at a Lawn and Garden trade show.  It struck me even then as it has fine fern like foliage which has pinnately compound leaves.  There are up to thirteen leaflets  on each stem and these have a very serrated edge giving even more texture to the appearance of this rose.  This rose, Rosa hugonis is called the Golden Rose of China as it is native to China.  In its' native habitat, it grows in poor, dry and often rocky soil in full sun.  Seed was collected by the missionary, Fr. Hugh Scanlan, and sent to Kew Gardens in 1899.  In 1908 plants were sent to the Arnold Arboretum in Jamaica Plains, MA and thus was its introduction into U. S. horticulture.  As you can see from the picture, the flowers are borne on arching stems in May. 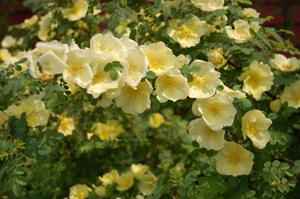 They are between 1 1/2" and 2"  across and are primrose yellow, single, saucer shaped blooms. 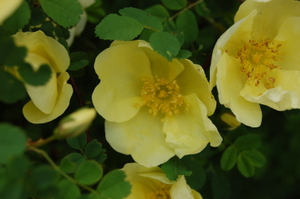 This species shrub rose will grow to about 8' x 8' and is hardy to Zone 5 although there are some reports that it can survive temperatures as low as -40F.   I can find only one drawback and that is that it has no fragrance.   Are any of you growing this shrub rose and, if so, what do you think of it?