There is much to be said for winter in New England. I know, it is cold and dark but cold is good and dark is restful.  Every gardener needs a bit of a rest when dreams of past and future garden glory can take over. Nothing is as beautiful as the garden was or will be next season. All is possible. As for the cold, it is necessary for some plants in order to produce flower buds. This process is called vernalization. The actual definition of vernalization is ' the induction of a plant's flowering process by exposure to the prolonged cold of winter, or by an artificial equivalent.' Other factors are, of course, important and you can read more about the process here if you wish.  As a gardener, I would submit that I need a 'vernalization process' as well. The tropics are not for me at least not for more than a week or two in the middle of February. A warm climate is lovely but cool temperatures restore me.  There is nothing like a walk outside on a cold day as long as one is properly dressed for the low temperatures. Anything over 15F is comfortable for a walk. The air is clear and there is often an energetic crunch of snow underfoot. 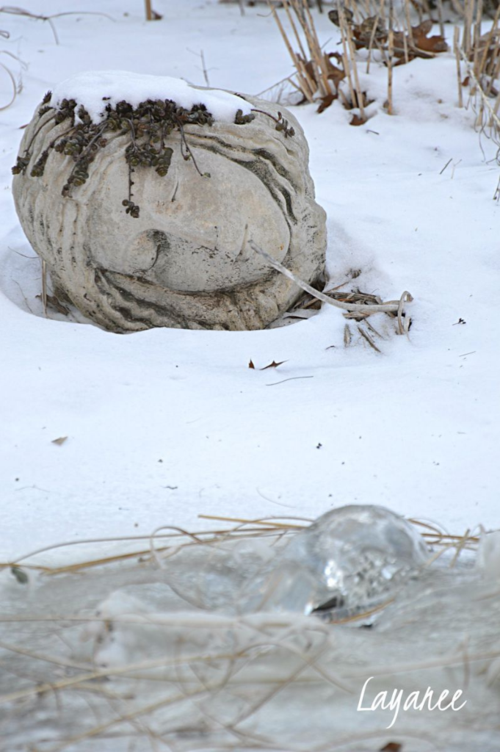 The world is mostly black and white here in New England in winter but those few spots of color, color which would not be noticed during the height of June bloom, is cherished and appreciated. The boxwoods punctuate the landscape and the bleached stems of tall grasses lend subtle color and movement to the garden. 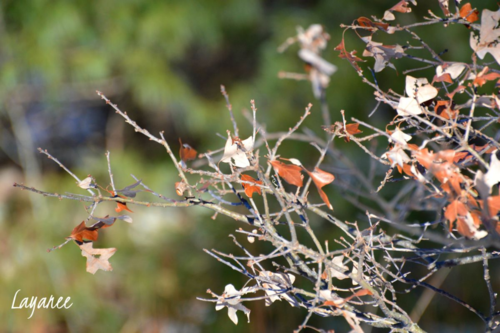 A walk in winter requires greater attention to detail. The sights and sounds are much more subtle than at any other time of year. The trees talk in the rustle of the oak leaves, which are slow to fall, and they define this environment. Pine trees whisper and tell their secrets to each other.  The lights of Christmas have been replaced by the few bright plants glowing in the garden. The bare stems of the Cornus stolonifera 'Midwinter Fire' cheer from the sidelines providing bright contrast against the Dwarf Alberta Spruce. The low cotoneaster sprawls at ankle height and its berries yell unnecessarily for attention. 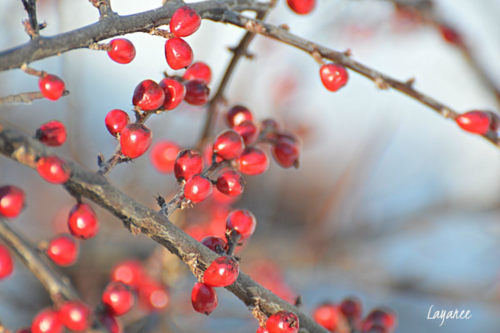 For me, there is yet another reason to walk in the cold these days since Gibbs has joined the family. 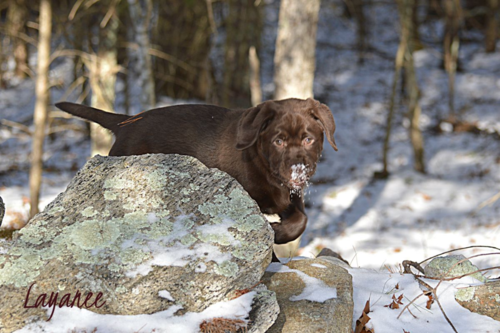 Puppies need a bit of exercise and this pup loves to chase the secret scents of winter. He has already embraced the field and the stone walls which provide nooks and crannies to investigate.  Gibbs is eleven weeks old today and it has been three weeks since he has become part of the family. He loves to chew sticks, acorns and pine needles not to mention socks and fingers. 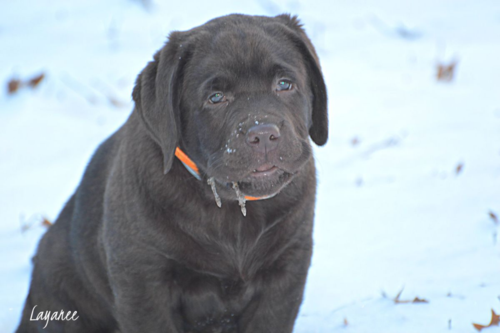 Many people think winter is not a great time to add a puppy to one's family but I would disagree. These short days with no gardening to be done seem just the perfect days to watch a puppy grow. 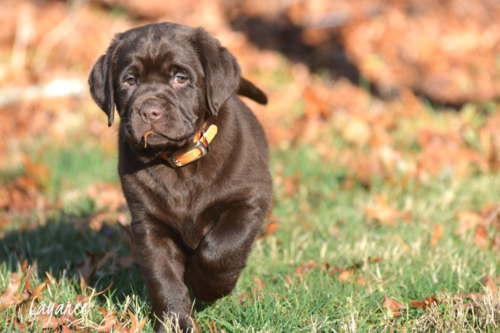 I think I have perfected it. The 'it' being the perfect way to start the new year. L.J. Gibbs! Gibbs came home to Ledge & Gardens on January 1, 2016. He now weighs 15.5 lbs. This Gibbs has no TV fame but we hope he has the longevity of that long running TV show NCIS. We already know that our Gibbs is much more emotionally responsive than the one on TV. Gibbs is 8 weeks old. He was born on November 6, 2015. We did consider adopting a pound puppy but Tucker and Cooper, the past canine residents here, came from the most wonderful home, Tonmar Kennels in CT. They breed Labrador Retrievers. Tucker and Cooper were both yellow labs. Tucker lived to the ripe old age of 16 and he was a dignified dog. Cooper came home with us in 2010. Cooper was a bit of a 'honey badger'. I introduced him in a post here. He was top dog from the day he arrived. Tucker was too dignified to argue that fact. Cooper should still be with us but he developed complications from Lyme disease and went over the rainbow bridge just a few weeks after Tucker in May of 2014. As you can see, Gibbs is a chocolate lab. Who doesn't love chocolate?  I am finding it a bit more difficult to photograph him with his dark face and eyes. If the snow ever arrives, I am sure it will be a bit easier. We have been without a dog for over a year and we have missed that companionship. A dog is four legged love. Unconditional love! I just read that the Dalai Lama has said that "Love is the absence of judgement". While I am sure he was talking about people loving without judgement which, as we all know, is difficult. Dogs don't judge. They just love. Gibbs will teach us the way as did Tucker and Cooper before him. He is the new Job Supervisor. He is too young yet for the responsibilities of that title but as he grows he will learn to oversee all garden tasks and provide a bit of deer management. We hope. 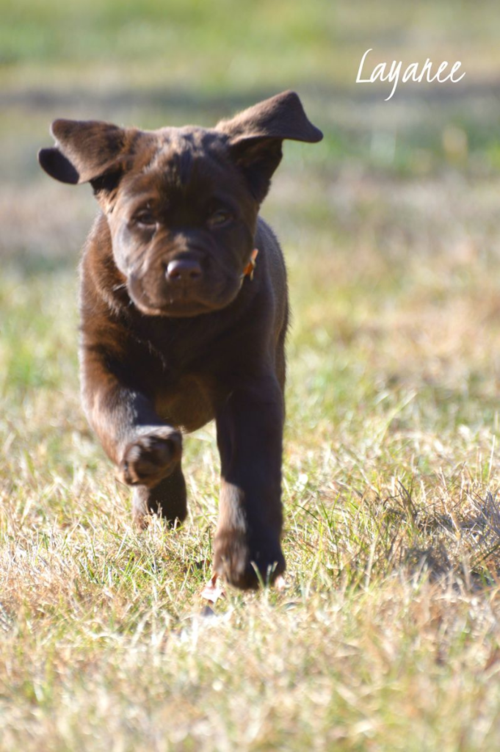 Don't tell him just yet. For now, he is just providing endless entertainment. He is adjusting to his new home and so far loves the leaves, the fields and his meals. 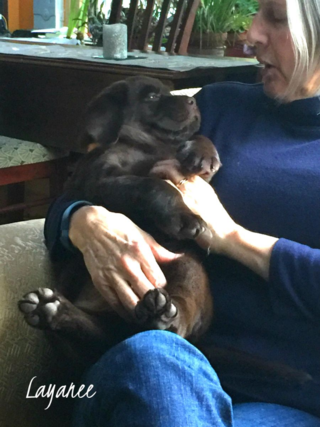 He also likes a good cuddle. He is mildly inquisitive. On his second day here, we went for a walk and I took him over to the fish pond for the first time. I was watching closely but I was unprepared when he just stepped off the edge. Labs love water but they cannot walk on it any better than a human. I should have been prepared since Cooper did the same thing although it was summer and it was a dunk into the swimming pool. Puppies need a more gentle introduction to water than total immersion. It was a chilly 25F. Needless to say, we both had a bath and there was a bit of shivering and whimpering. Gibbs got me to stop that pretty quickly with a lick and a kiss. Winters can be so long here in New England. I think that Gibbs will keep us pretty busy until the garden beckons. 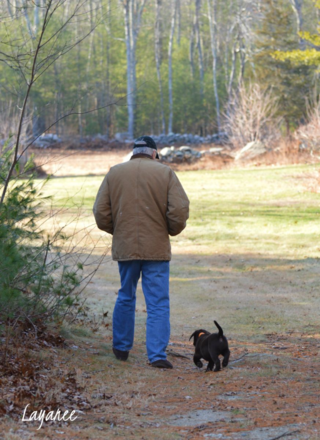 Whoever he is, top dog or lap dog, the EM (Equipment Manager) and I will love him without judgement.