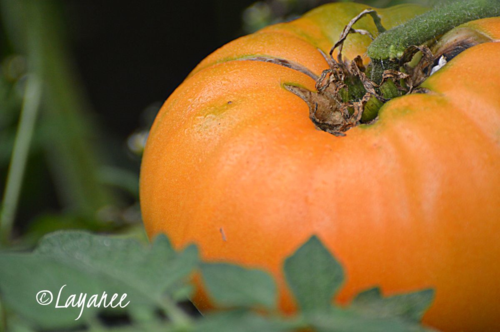 Has a gardening season ever flown by as fast as this one? No, that's not a pumpkin, yet. It is a tomato and the tomatoes tell the tale. They ripen during the hot days of August here in my garden and August is the beginning of the end.  The tomato vines look a bit dismal with the yellowing and spotting of leaves (no, I am not going to show you)  but they are laden with fruit and the fruit is perfect. For some reason I planted these 30 vines much too close together this year. I don't know what happened and can only offer the explanation that the snow did not leave the garden until mid-April which condensed the season's spring cleanup and rattled the brain of the head gardener. I plant mostly heirloom tomatoes starting them from seed in April. The vines are about six feet tall. Well they would be if the cages made by the Equipment Manager were six feet tall. As it is, they are tumbling and spilling down the sides of the cages. It is a jungle out there. A divine smelling jungle. I try to plant a variety of different tomatoes each year although there are favorites. 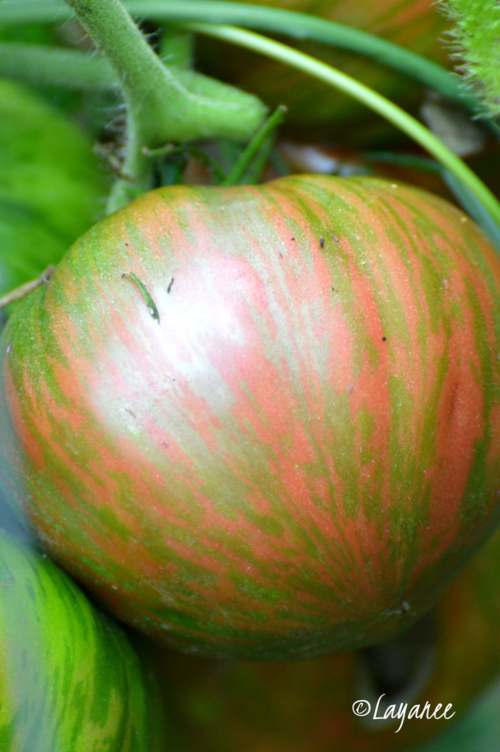 'Mortgage Lifter' is one which I won't do without. It is delightfully acidic and huge. One slice for each BLT sandwich.  I have come to adore 'Pink Berkeley' for its dark green and red striped skin and great taste. 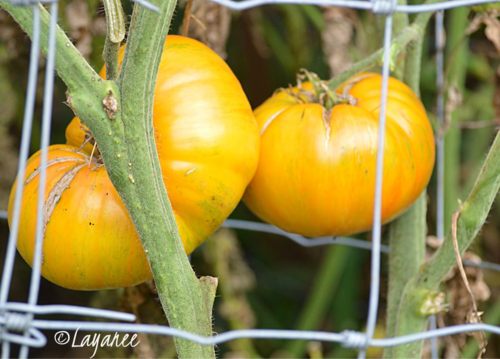 This year I have grown 'Copia' for the first time and it is also quite large and golden orange. It has a surprising 'punch' of flavor and very large fruit. The early tomatoes, 'Early Wonder' and 'Sioux' throw out a few small tomatoes in July but the bulk always ripens right along with the late tomatoes. 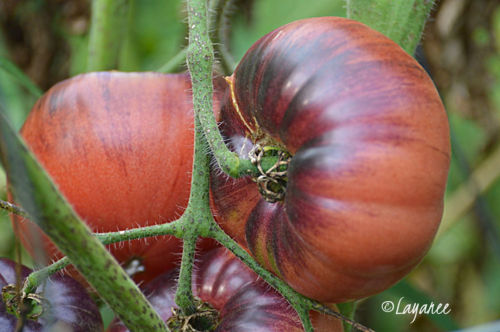 One other stand out favorite is 'Indigo Blue Beauty' which has a mantle of shading on its shoulders. It is a medium sized tomato with excellent flavor. 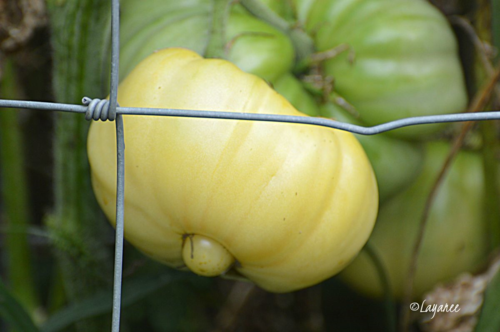 Paler than pale, 'White Queen', looks a bit insipid and drab. It has very soft skin, almost mushy but I decided I must at least taste it and was pleasantly surprised with the sharp, pungency of its flesh. There is consolation to hot days, dry weather and withering foliage when you have a table full of tomatoes. 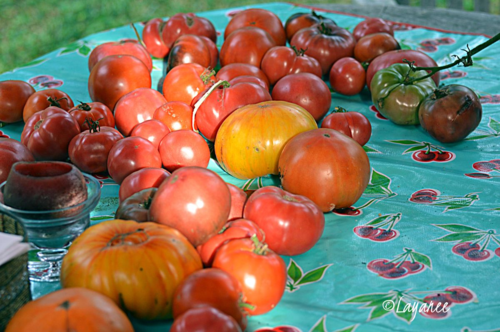 I believe that tomato flavor results from the 'terroir' of the soil in which the tomatoes are grown, much like wine. I have tried 'Brandywine' and they have had little flavor although it is the heirloom with the best press agent. That said, the worst tasting home grown tomato is always better than the best tasting grocery store tomato. The dark and cold days of January will come all too soon but here, for now it is tomato soup, tomato salad, tomato heaven. 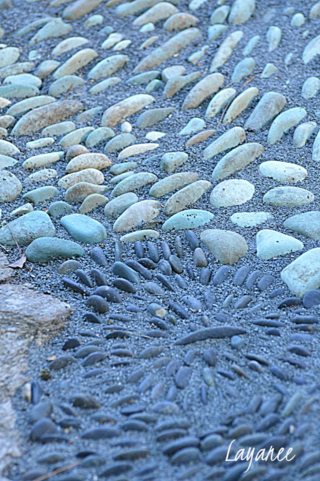 August has brought with it high heat and lethargy. I have a new appreciation for those who garden in warm and down right hot areas of this country and the world. There is nothing that saps the strength like heat and humidity. It is time for porch swings, adirondack chairs and tall, sweaty glasses of cool drinks. Or, one could do piece work. The walkway to the front door runs right through a patch of ledge. A jackhammer was required to level the area for the brick walk. On either side of this area there is the still existing ledge and pockets which are too shallow for planting resulting in a  design dilemma. 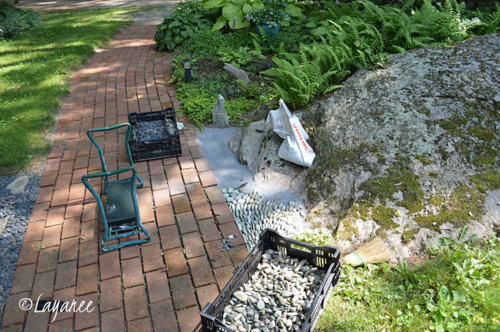 For years I have had decorative rock in these spots. Beach stones are pretty and smooth and solved the problem of planting in these spots but they also got dirty and weeds were a problem. They  grow pretty much anywhere they can grab hold. Another solution was necessary. A friend of mine is building a new patio and she mentioned that she wants some mosaic laid in the hardscaping. She is artistic and will probably do it herself. She told me this some time ago. That thought steeped and settled and finally percolated to the top. I would do a mosaic of the beach pebbles on the right side of the walkway. It is a small area and a manageable project. 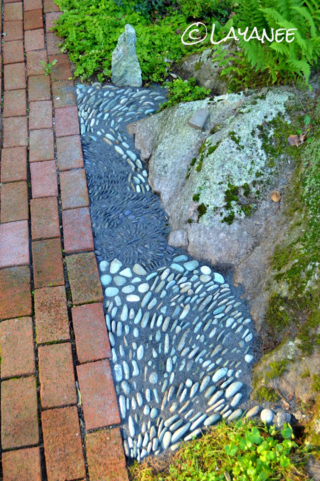 So, I picked up some polymeric sand at the local stone supply company. You can read about polymeric sand here. It hardens once water is applied to it making joints stronger. It is fairly impermeable which means there is little option for weed seeds to germinate. I then cleaned out the existing rocks, washed them and settled down on a very warm summer afternoon to create. I laid a two inch base of poly sand in which to set the stones. 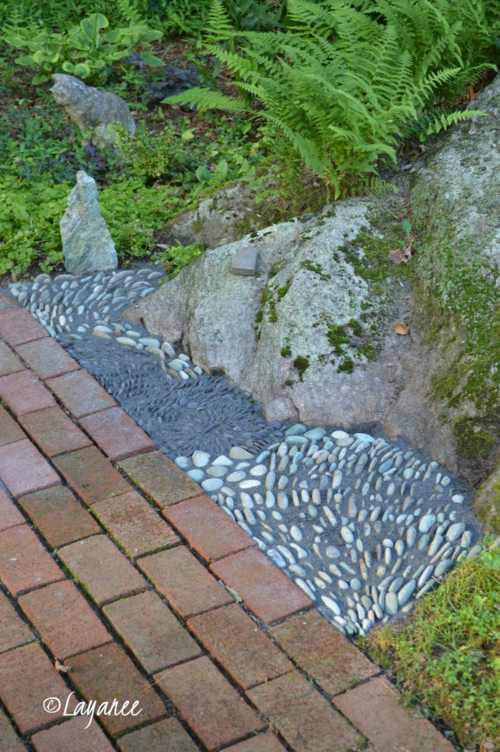 Once the stones formed the pattern, I added more sand to the top and swept it between the joints. Then, water was applied.  Two hours later, the job was done. Not perfect but very pleasing to my eye. 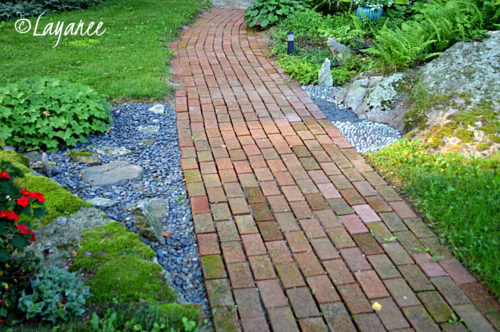 Now the question is 'should I attempt the other side'? It is a larger area and a bigger project. I am undecided. I would love your input. 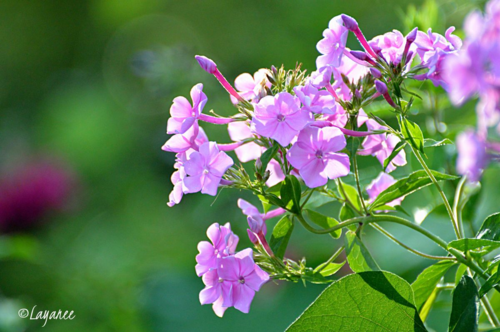 Somehow gardening tasks took me away from the blog in June and July. Well, gardening tasks and other pursuits. The gardening tasks have paid off with dividends in the form of sweet corn, squash, kale, lettuce and ripening tomatoes. These all feed the body but the smell of garden phlox sure feeds the soul. I have found that the newer cultivars of phlox have much less scent than those garden 'volunteers'.  These rogue phlox are always a bland, to my eyes, pinkish purple but there is nothing bland about their scent.  The heavy air of an August night carries this fragrance on the breath of a warm evening. The mornings arrive with the creak of cicadas and the twitter of birds. The sultry air of summer entices the butterflies out to romp with the flowers. 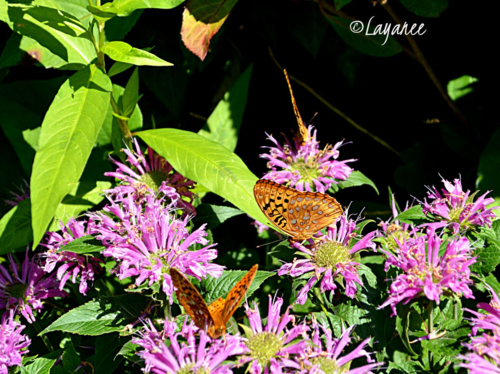 I am seeing a plethora of butterflies this year although no monarchs have arrived as of yet. 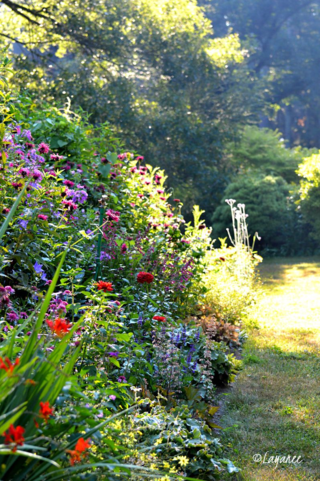 The long border is full of color and there is the look of reckless abandon there although this gardener wields the pruners often and with precision. 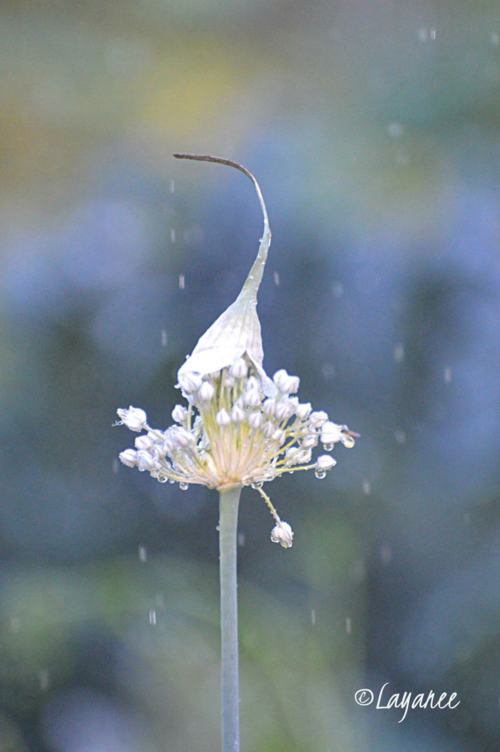 In the vegetable garden there are also a few volunteers and this onion which was left to its own pursuits is sporting a jaunty cap as it readies itself for its flowering dance. These summer days with the garden in full bloom and fruit are the gardener's reward for cultivating life. A bit of deadheading, a keen eye on the opportunistic weeds and a good book are all that is required on a warm summer afternoon. The scent of phlox is free.