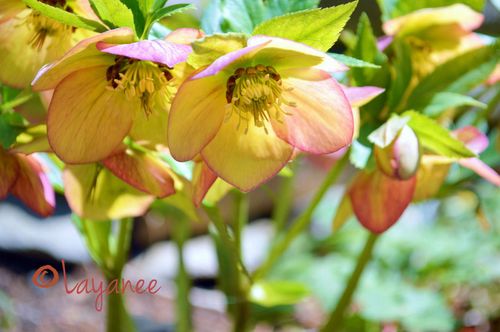 In the spring, the morning walk with the dogs yields something new each day. The hellebores are in full bloom and require a worm's view to capture a picture as their flowers nod to the ground rather than the sky. 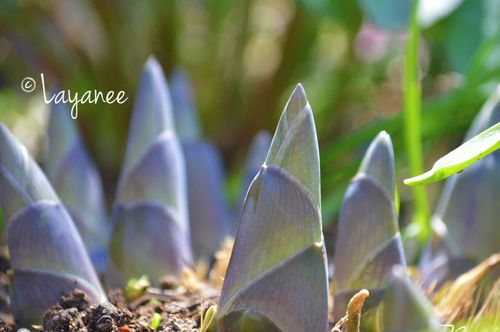 Thick and sturdy shoots on the Hosta sieboldiana 'Elegans' have emerged this week. Not all hosta have such fat shoots. This is a large hosta and one which performs well each year. It has glaucous blue foliage which measures a good eight to ten inches across. 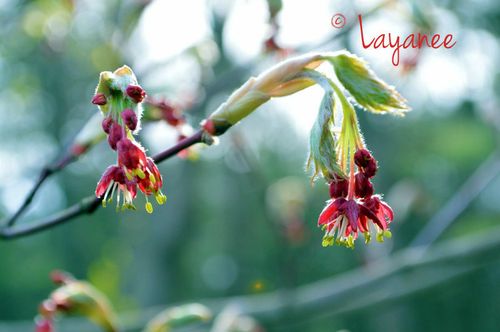 In contrast, the small blooms of Acer shiraswanum 'Aureum' are worth a very close look. Delicate and colorful, they would go unnoticed by the less curious. From a distance, these flowers are virtually invisible. The walk by must be slow. There are many subtle blooms in spring. I have one shrub, Corylopsis pauciflora, the buttercup witchhazel, which is very stubborn. It does not share its flowers easily. 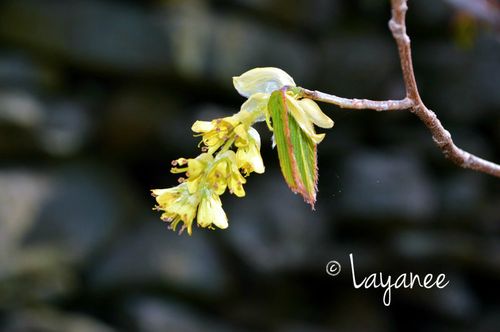 This year there are two on this shrub which has been planted in the border for several years. I am on the edge of its hardiness zone so perhaps that is the reason for its sparsity. 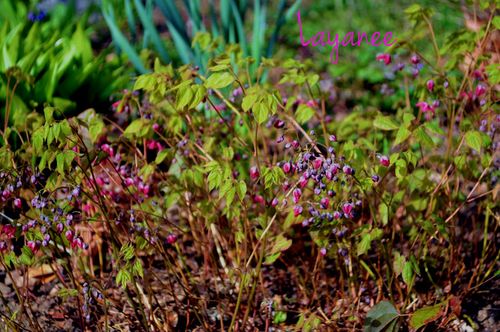 The undervalued and underused epimediums are starting to bloom. Dry shade is a challenge for any gardener but I don't see this plant in too many gardens that I visit. It has beautiful flowers and wonderful foliage. The flowers can be white through pink/red and yellow through orange. What a range of color. There is one called 'Orange Queen' which is on the must have list. 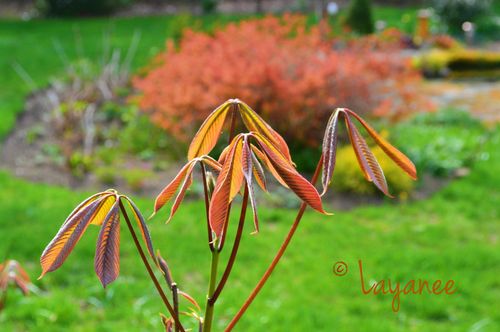 This morning, sun was shining through the newly emerging leaves of the bottlebrush buckeye, Aesculus parviflora. The foliage turns green as it matures but this bronzy hue warms up a cool spring morning. Every day is a new day in the spring garden. What is warming your soul in the garden this year? 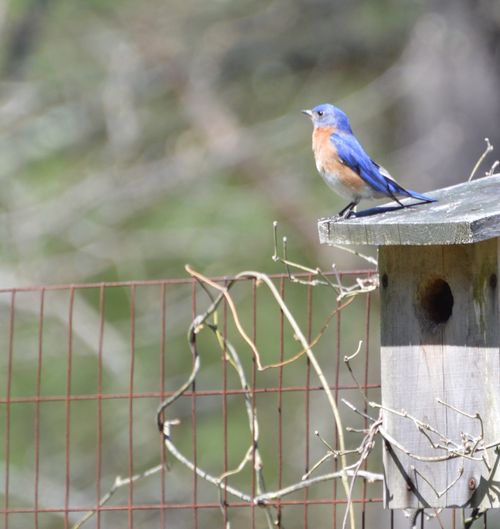 When birds come to visit the garden it is a welcome sojourn but when they call the garden their home it is a high compliment. The above bluebird may still just be inspecting this house but the flutter of intense blue is as welcome as the first flowers of spring. 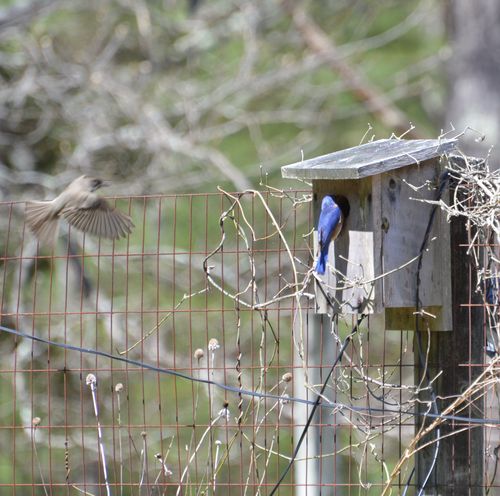 This house has been inhabited before but not by bluebirds. Bluebirds prefer a house facing an open field and while this just faces an expanse of lawn edged with a garden, it may suit his needs. Bluebirds are insectivores during the nesting season and need an open space in which to find food. I would welcome this natural pest service and hope to have a family in residence. 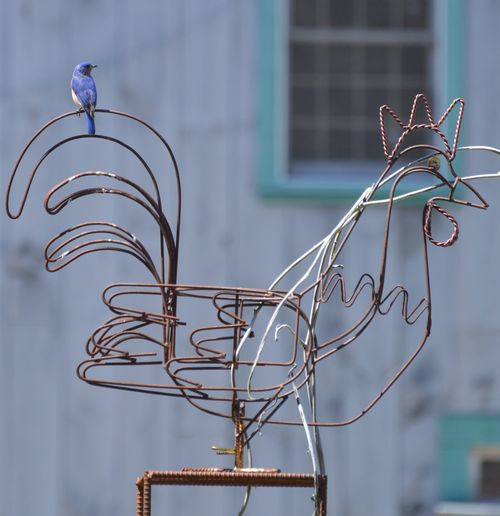 I have also noticed a female cardinal at the feeder each day. Today as I closed the gate to the vegetable garden I roused the cardinal from her nest in the ambitious Dutchman's Pipe vine. 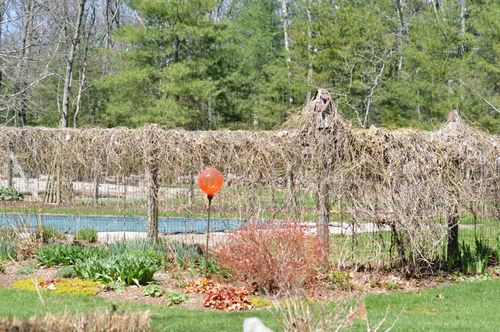 The nest is well hidden from view. It is in the densest part of the vine and between the two posts on the right of this picture. I could see two eggs which were grayish white with spots. The excitement of spring is usually in the unfolding flowers of the day but there is so much more excitement here this year with the nesting birds. At least the cardinal has put her stamp of approval on the garden. I will try to get a picture of the eggs in the coming days. I don't want to scare her though. Do you have birds nesting in your garden and, if so, what kind?
Layanee 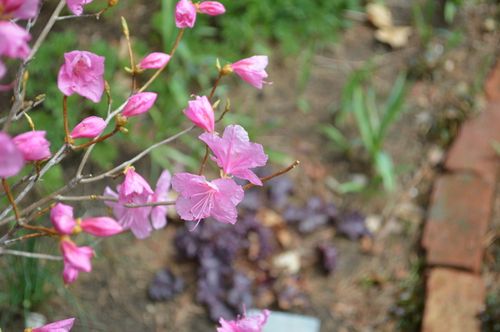 The slow bloom continues here in southern New England. The Rhododendron mucronulatum 'Cornell Pink' has finally made an appearance and one that is most welcome. You could call this bubble gum pink or cotton candy pink or even Pepto Bismol pink. It is clear pink whatever you want to call it and you should have a few of these in your garden. You should if you can. They are delightful. 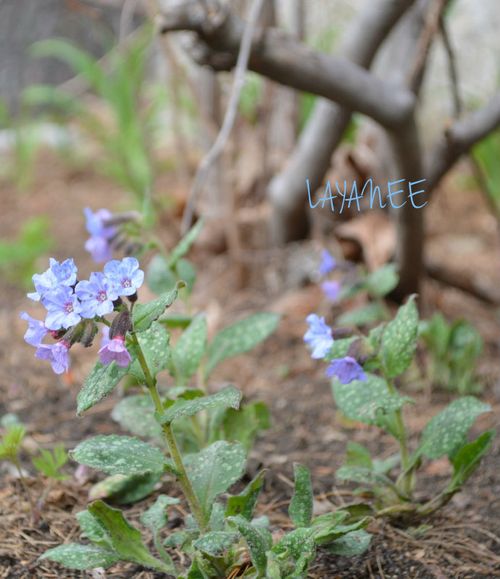 The pulmonaria is blooming at its feet and while small, it continues to gain size as the warm weather unfolds. 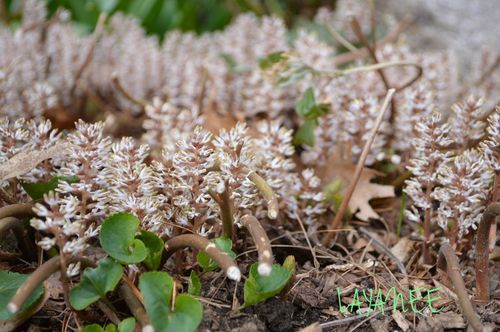 The curious bloom of the native Pachysandra procumbens is more evident if the ragged leaves are removed. I haven't done this in previous years but I think I will make it a part of the annual maintenance routine. The new leaves are just emerging and this plant is more of a clump grower rather than a rampant spreader like its cousin, Pachysandra terminalis. The foliage is also dull rather than shiny but it has a sturdy and lush appearance. 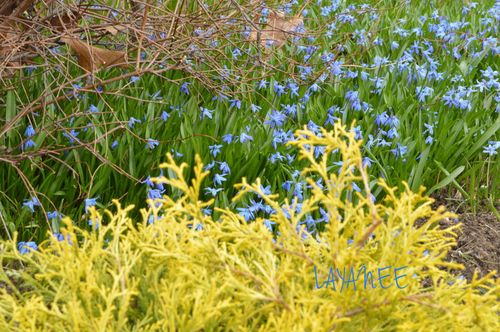 Scilla siberica is blooming and this little bulb is a must have given its easy care and ability to naturalize. Lapis blue is not a common color in the garden and this one shines from a distance. Another small tuber is blooming, Corydalis solida. 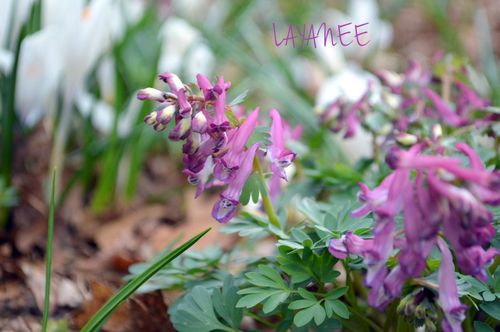 This spring ephemeral has lovely lacey foliage and it also spreads easily. I have found it in places far from its first home which makes me wonder how it traveled so far. No doubt in a division of some other perennial.The forsythia is being a bit persnickety about bursting into bloom and is just in colored bud. The Chionodoxa are blooming their beautiful blue and the river of daffodils is just unfolding. 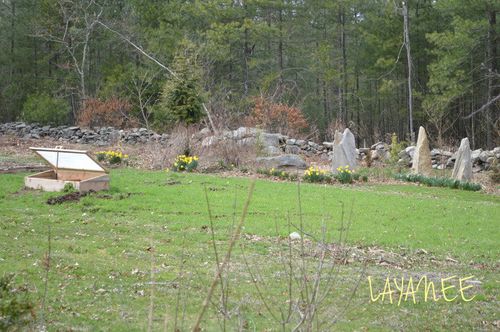 Every spring day brings something new to the garden if I look closely enough. I hope to see what is blooming in your garden via the blog of our Bloom Day hostess, Carol of May Dreams. Sorry I am late to the party.
Layanee 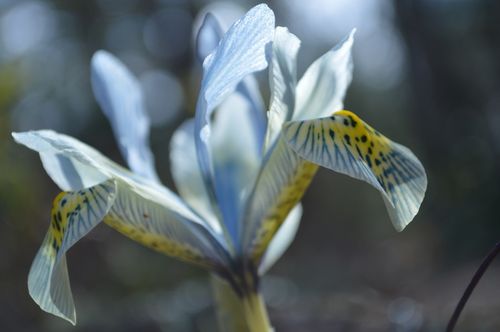 It is that time of year again. Katharine has come to visit. She wears a wedgewood blue frock adorned with darker blue gemstones and panels of clear yellow. Her frock darkens ever so slightly in color as the days pass. This cool spring has allowed her a very long visit. And, she has brought relatives. 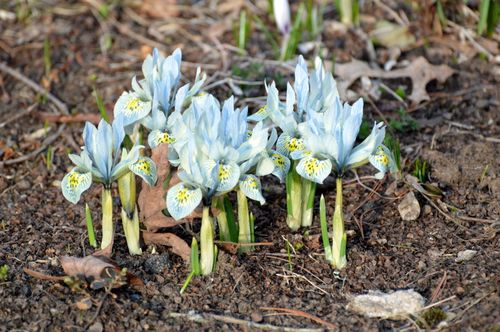 The original clump seems fuller this year which may  mean that she is happy with this site in humus rich shade. This iris is a bit stockier than others of her clan having sturdy parentage. A gentleman and part time plant breeder, EB Anderson, crossed Iris histrioides with Iris danfordiae but insects must have intervened as DNA testing shows the other parent is Iris winogradowii. Iris histrioides is native to Turkey and is blue. 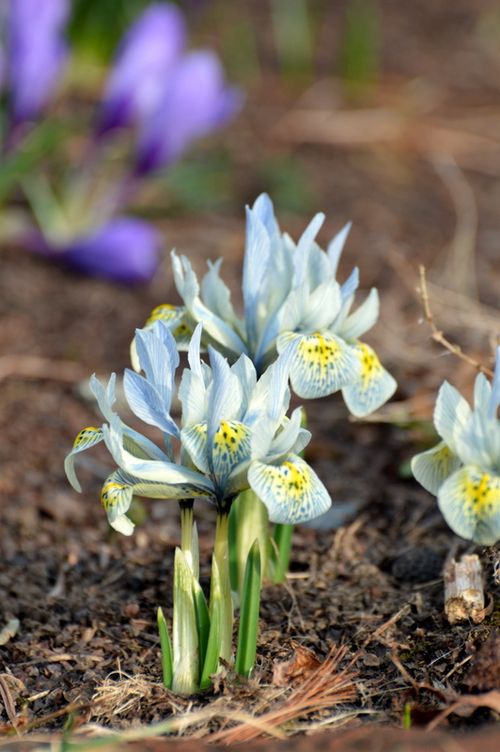 Iris winogradowii is native to Central Asia where it grows in alpine meadows. It is yellow and tends to be stoloniferous which may be the reason this clump above has increased in size. But who, you might ask, is Katharine Hodgkins? She must have been quite a beauty. She was the wife of Mr. Anderson's friend, Mr. Hodgkins but I can find little information on her. 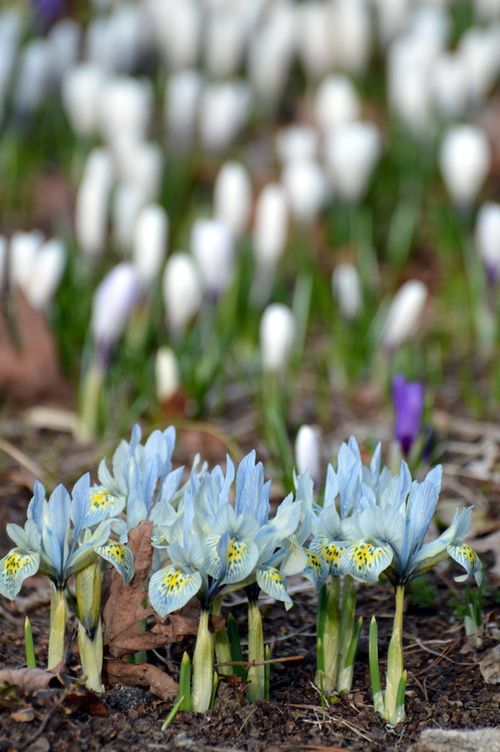 This plant was hybridized in the 60's. It has none of the 60's psychedelic coloration. It is refined and luminous although I do find that it 'disappears' in the garden and is best planted next to a well traveled path. This is its second spring here in my garden and I find her quite bewitching.  I recommend her to every gardener as she is lovely and a somewhat unusal addition to the garden of little bulbs. 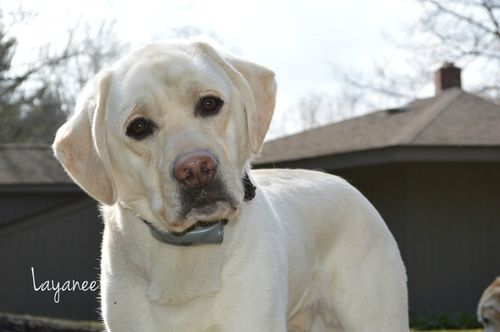 If you have never before seen a spotted salamander your reaction might be something like Cooper's. They are curiously prehistoric looking and a quizzical cock of the head is a natural reaction to this unexpected and shy creature. Cooper wanted to play but the salamander was not in the mood. I actually found two of these creatures in the fishpond. The pump was not working properly so I pulled it out of the pond and, akin to a horror film, the back end of one was hanging out of the pump. Not pretty since the pump was still working. 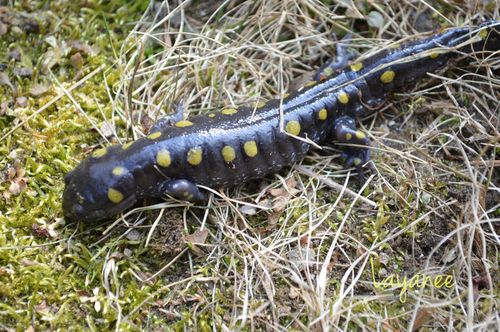 That one did not survive. The screen covering the pump intake had fallen off the pump into the bottom of the pond. I did scoop the pond for about an hour trying in vain to find that screen. No luck but in the muck of leaves which came out of the pond this other spotted salamander struggled to find her way back into the water.  I had to take a few pictures before helping her on her way. I did read that this amphibian can live a long life, up to twenty years. 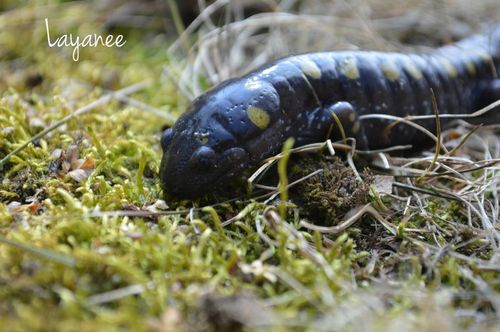 This one was about six inches long and quite fat as you can see. They can grow to nine inches long and while they look like a tasty treat they secrete a milky toxin which helps keep them safe from predators. This salamander is carnivorous eating worms, crickets and other creatures. It is also nocturnal emerging at night to feed and mate. The spotted salamander lays its eggs in vernal pools which is, no doubt, why these were in the pond. I do hope they were not a pair. The first unfortunate salamander was laid to rest under a blue holly bush. I often see the common salamander but I had never seen one like this prior to this unfortunate occasion. I am sorry for the loss of one but the other will, hopefully, have a long life and many babies.
Layanee 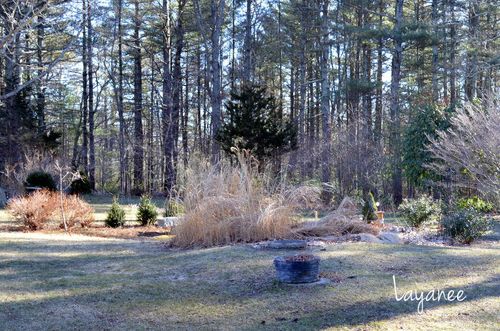 Every year I burn the grasses next to the fish pond. It takes much less time than loppers, shears, pruners or even a blade trimmer. They took quite a beating this year with snow bearing down on them most of the winter.You can see how shattered and bent they are. These are Miscanthus. There is one Miscanthus sinensis 'Gracillimus' and three Miscanthus pupurascens. There are also a few Pennisetum sataceum at the base on the right of the taller grasses.

The EM lights it up
Burning not only takes them down quickly but it also sweetens the soil. Fire is nature's cleansing tool and I know she wouldn't mind our borrowing it. The burn this year was almost two weeks later than last year. I usually burn them around St. Patrick's Day. This year snow was still heavy on the ground and grasses. Friends are always invited to share in the fun. 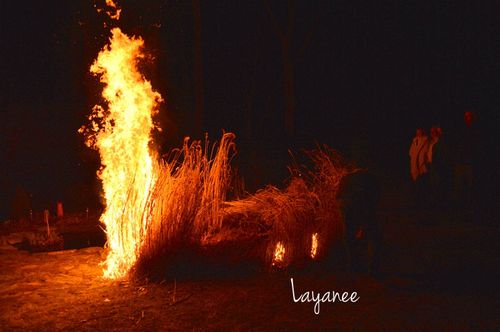 This year we had a crowd of ten watching the show. Grasses burn rapidly and they burn very hot. Usually everyone crowds around  as the EM (Equipment Manager) puts the torch to them. 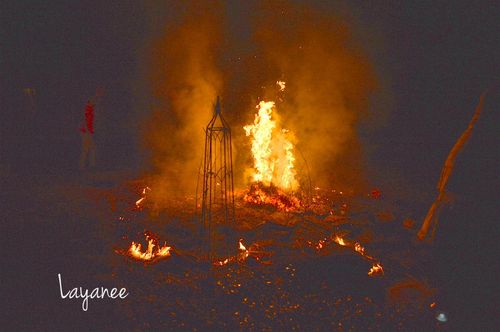 In seconds, the fire roars and everyone backs up at least ten feet from the blaze. Fire dances and drips as each clump catches and spreads the flames to its neighbor. 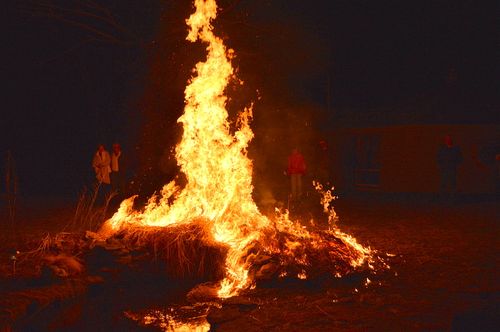 The black scar where the grasses once stood is impossible to see in the evening. 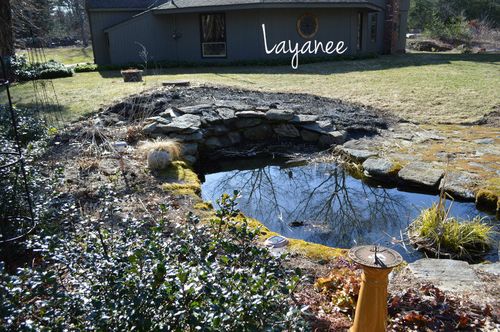 The next morning reveals the stain but soon, small green shoots will rise to the sky as another season progresses. Here in this town, no burning permit is necessary if there is snow on the ground and we do have snow piles along the drive.  This annual event signals new growth and a new season. It has become a fun ritual. Any excuse for a party, right?
Layanee