Summertime and the Living is Easy 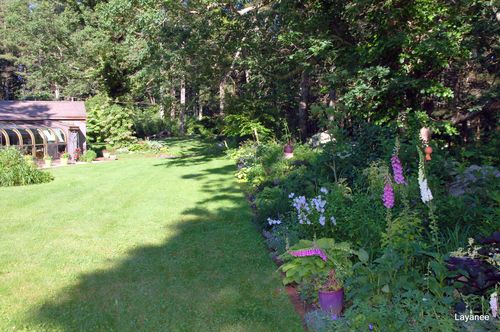 It seems as though everything in the garden is in bloom in June. It is not true, of course, but there is an abundance of bloom. The sky is bright and the shadows are deep today making photography a challenge. 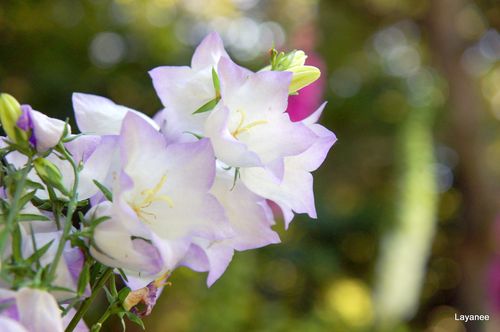 The long border has waning foxgloves, peachleaf bellflower, the bright blooms of impatiens and the textures and different shades of foliage. 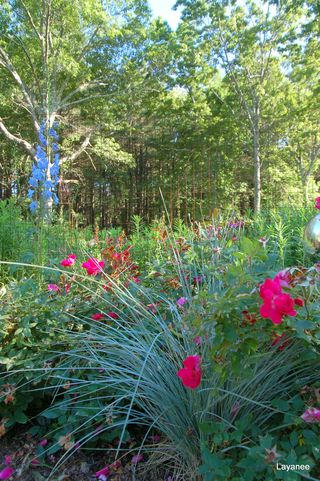 The deep rede knock out roses are in bloom beside a clear blue delphinium.  New Dawn is blooming in abundance, rolling over the fence by the gate. 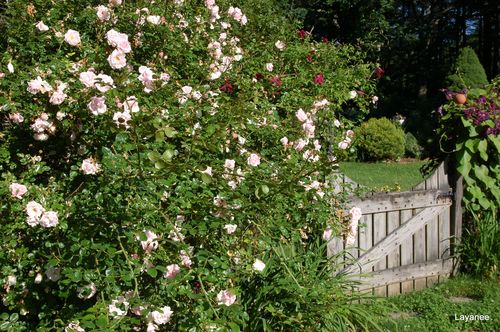 It has a light but clear fragrance. The astilbes are starting to bloom. It seems quite early for them as it is not yet summer. I must check last year's photos to see when they bloomed in 2011...it was the end of June so we are two weeks early this year. 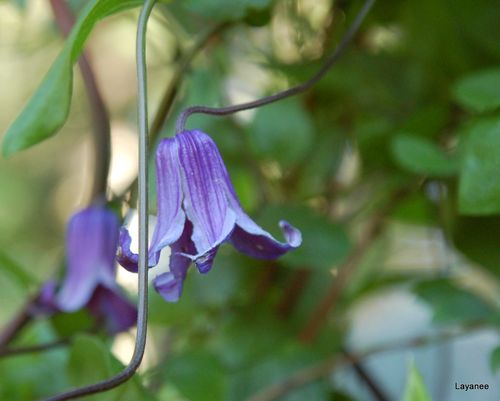 In June, small flowers can be overlooked but Clematis 'Roguchi' is a lovely climber and stands out with  significant purple/blue bells which are much different from the large flowered clematis such as Niobe 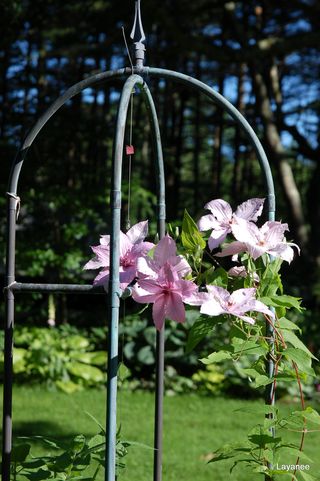 and this lovely pink whose name escapes me. 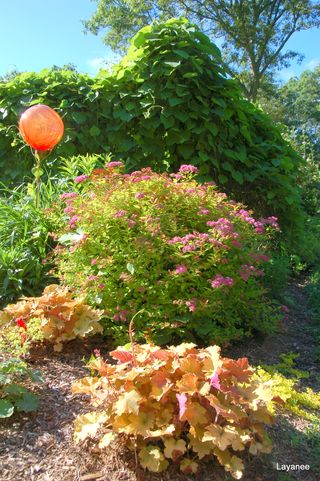 The long sunny border has much in bloom. I am loving the containers in the front of the greenhouse this season. 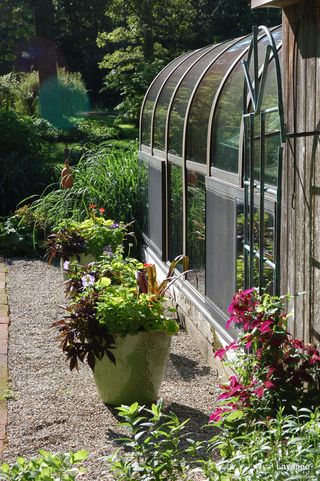 They contain hot colors and are filling out quite nicely. I really must do a container post. They are such fun. Many thanks for yet another Bloom Day hosted by Carol of May Dreams. I hope to visit many Bloom Day gardens this June. 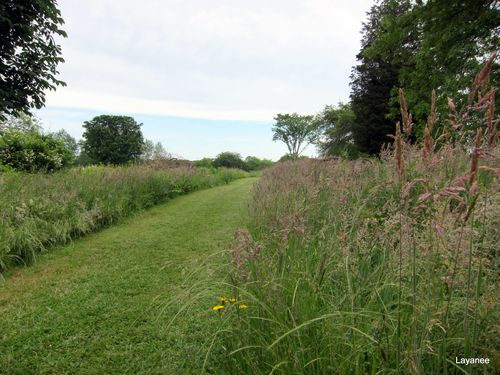 A perennial border is all about change. One needs to count on texture and foliage color when planning a border and while foliage color does evolve in some cases, texture stays the same and the flowers of plants come and go. That is the fun of planning a perennial border. Mine is certainly never perfect. Never. It is constant, this striving for perfection which may exist only in my mind. No matter. Each day brings something different. 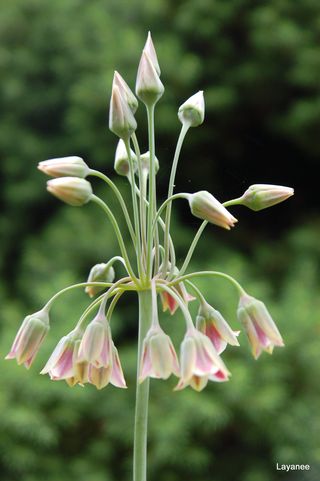 Today I noticed that the allium now named Nectaroscordum has changed its appearance. In flower, the blooms are clusters of mauve and white florets with a light green stripe. They emerge erect and unfolding as they mature, they hang like bells. Once the flowers pass, the seed heads form and point straight up into the air once again giving the appearance of a flower. It is yet another bulb with a very difficult name. 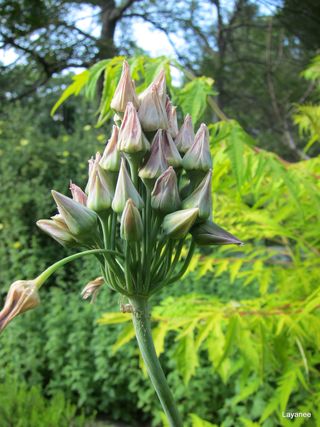 I added these bulbs to the border last fall and I am enjoying them immensely along with the 'Candles in the Wind' from the previous post. I am going to add more to the border and in anticipation of this addition, I am placing brightly colored golf tees in the ground in the border where these bulbs will be planted. It is always hit or miss when I leave this task to chance and just add them in the fall. This year the planting turned out quite well but next year I hope for an even better show. How do you decide where to put bulbs in your garden so they show to their best advantage?  Have you grown this one? I am wondering how long the show will last. Much of gardening is the fun of waiting, watching and learning.

Candles in the Wind 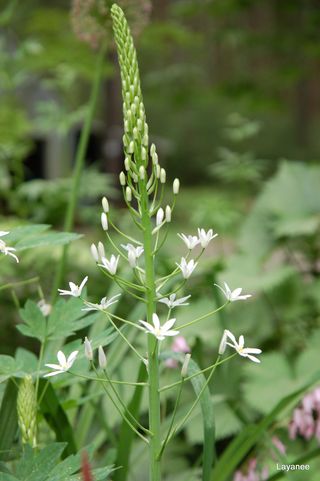 I am not sure why I rarely see this flowering bulb in other gardens. Perhaps it is the cumbersome name which seems to only be in Latin, Ornithogalum magnum. It is listed in John Scheepers catalog as hardy from zone 5 to 8. I have it planted in a border with filtered light and this is its first year in that border. I plan on adding more. 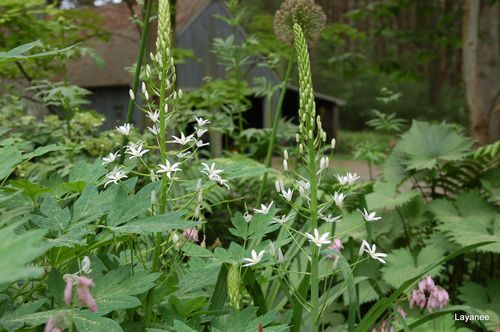 A member of the Hyacinthaceae family, this bulb produces multiple white star shaped flowers on  a raceme borne on 2'-3' stems. 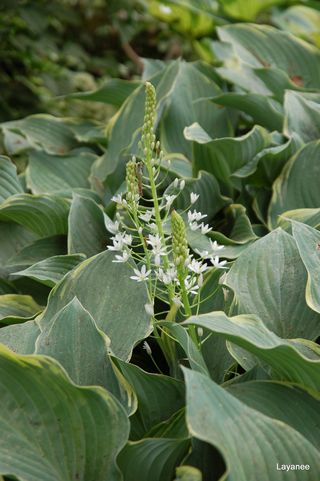 Planted in among perennials, the flower spike shoots up through the foliage appearing suddenly creating another dimension to a border. It blooms in June supposedly with the alliums. The alliums bloomed early here and are past bloom  but, no matter, this flower is just a delight. 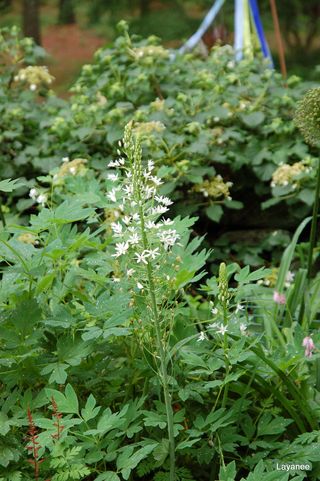 I think this flowering bulb deserves a more marketable name. Want to give it a go? I vote for 'Star of Spring' or 'White Lance'.  Ornithogalum magnum doesn't really roll off the tongue or give any hint of the beauty of this bulb. That name sounds as if it should belong to a big bird. What name would you like to see on this flowering bulb? 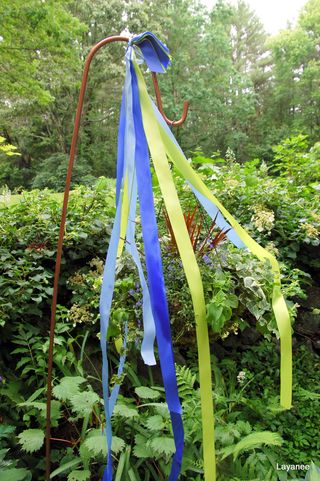 Blog posts have been in short supply here as I have been preparing for the 2012 Gentian Garden Tour which is a fund raising event for my garden club. Ten gardens in Scituate and Foster, RI were on tour on Saturday. The week prior to the date was clear, sunny and warm and towards the end of the week even the humidity dropped. 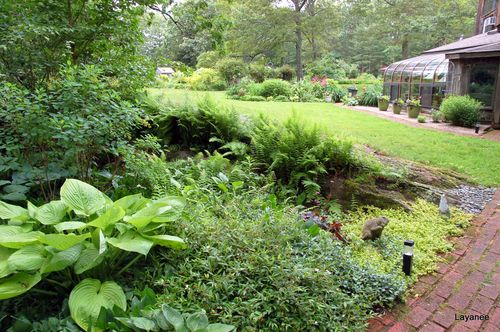 The gardeners all primped and planted, edged and mulched and prior to Saturday over 200 tickets had been sold. Alas, heavy rain came in early on Saturday morning. Not just a mist, but a gusher with almost two inches of rain falling during the day. Most of the rain was confined to the morning with a bit of tapering off occurring about five hours in the middle of the day. It is a good thing that most garden lovers are hardy. 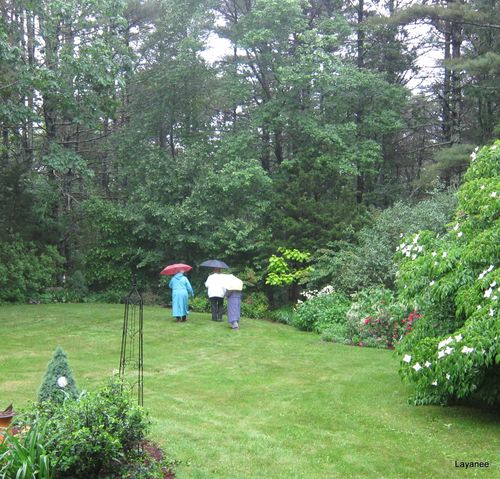 Umbrellas, raincoats and boots were the order of the day as almost 100 brave souls toured my garden. My friends across the road, The Dynamic Duo - Brenda and Rocky, also had their garden on tour which helped attract the crowds to this gravel road to nowhere but our homes. The 'Pink Chimes' Styrax japonicus had been damaged in an early snowstorm last year. The heavy snow load bent the main trunk as the tree still carried its leaves. 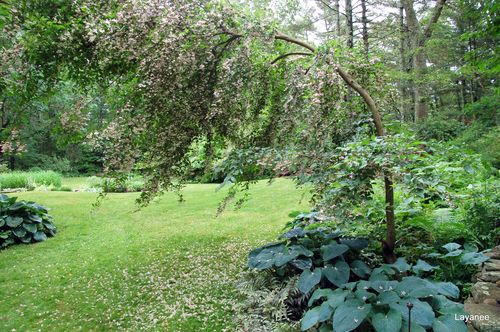 It did return to an almost upright position until this heavy rain on the numerous blooms caused it to bend to greet the garden guests on Saturday. 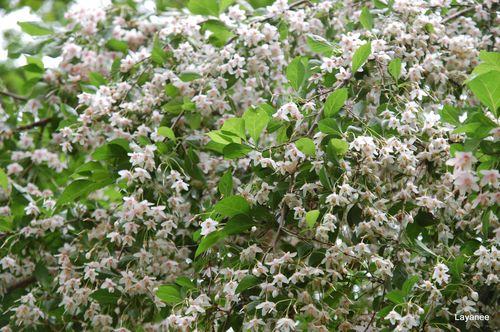 It formed a bower of flowers at the entry to the left front border. Many perennials have bloomed early this season which created a bit of concern. 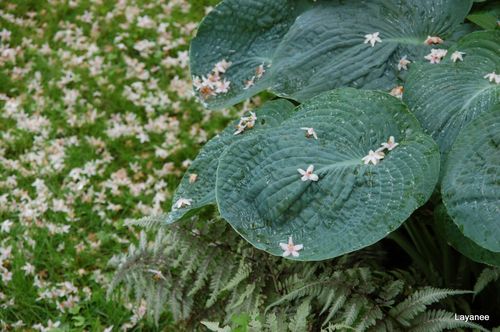 No one really knew what would be in bloom on the appointed tour day. No matter, the garden visitors roamed the borders at their leisure. Most had an umbrella and few were concerned by the weather. 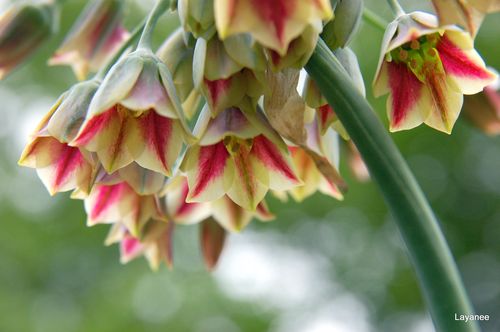 The Allium bulgaricum aka Nectaroscordum siculum ssp. bulgaricum was in full bloom as was the 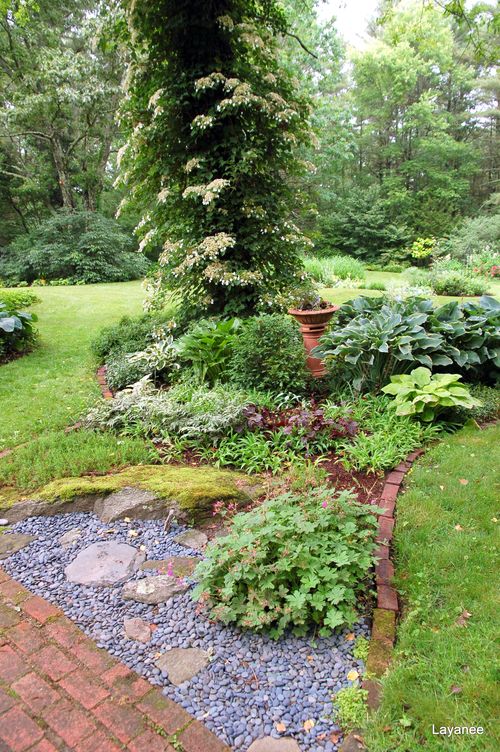 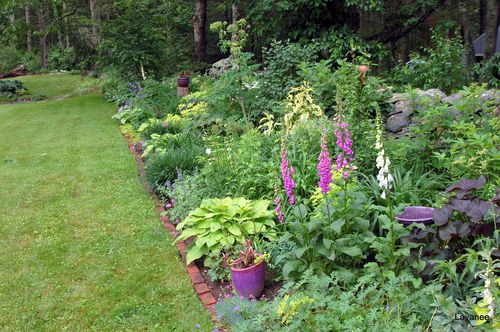 The borders were polished by the rain which served to wash the leaves of a heavy coating of yellow pine pollen. The patio umbrella glowed in the grayness of the day and the climbing roses bloomed early to echo the umbrella color. The garden looked as proper as it ever has thanks to many helping hands this year. 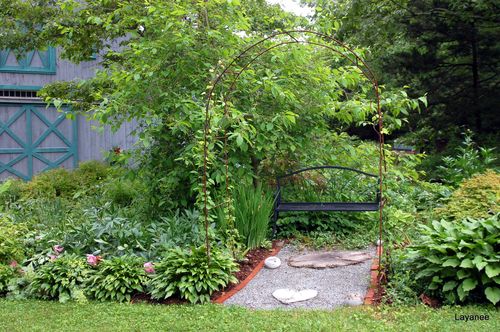 I would say the work in the garden is done for the season but all gardeners know this is never true. The rain has already encouraged more latent weed seeds to germinate so I will be out there weeding a bit and finishing up in the vegetable garden which has taken a back seat to borders this year. There will be deadheading and pinching and maybe even a bit more planting.  Mother Nature may not have cooperated with our garden club concerning this tour but she really did not keep away the most avid garden lovers. I do wish you had been here but if you wish a short, up close and personal tour of the left front border, you can check out this video. I will be posting more videos as it is very difficult to show a garden in its entirety in still pictures.