The height of summer? 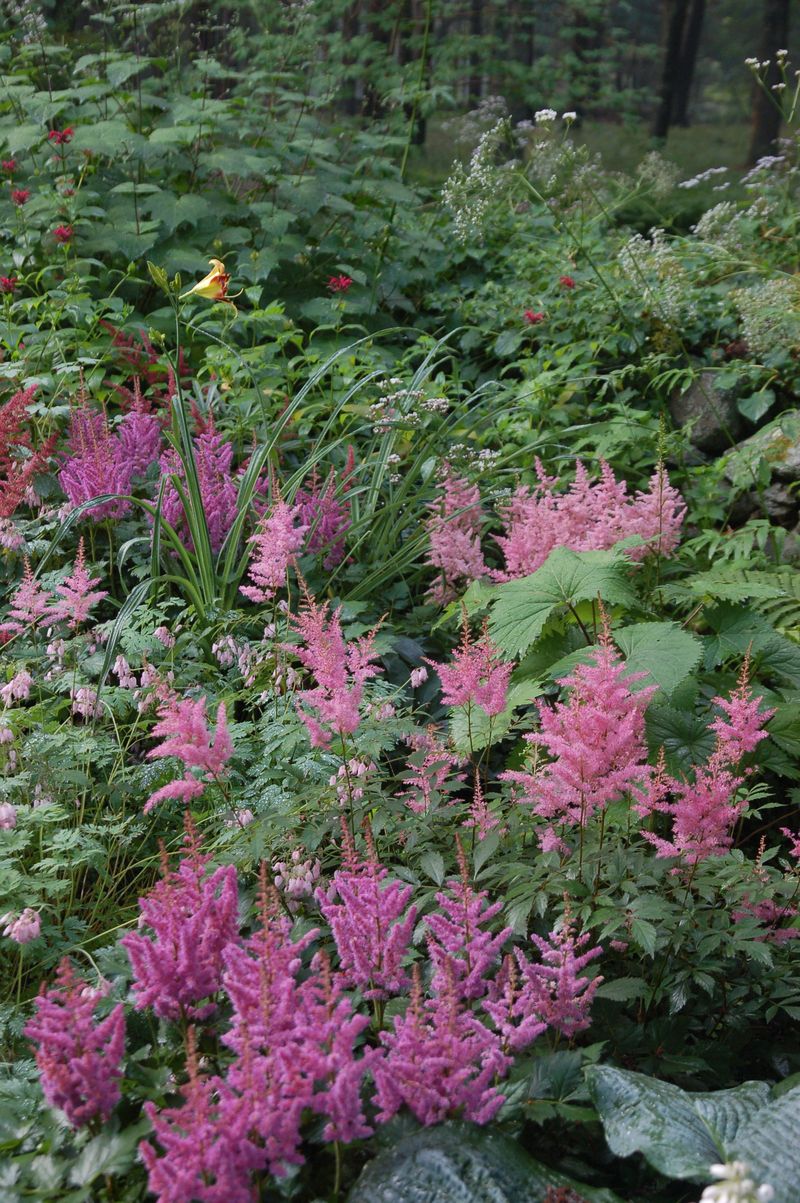 Really, summer is just in its' infancy here in Rhode island but not so the perennials.  Many are blooming two weeks ahead of schedule.  The astilbe are in full bloom right now at the end of June.  Last year's photo record shows them in full bloom on July 11th. 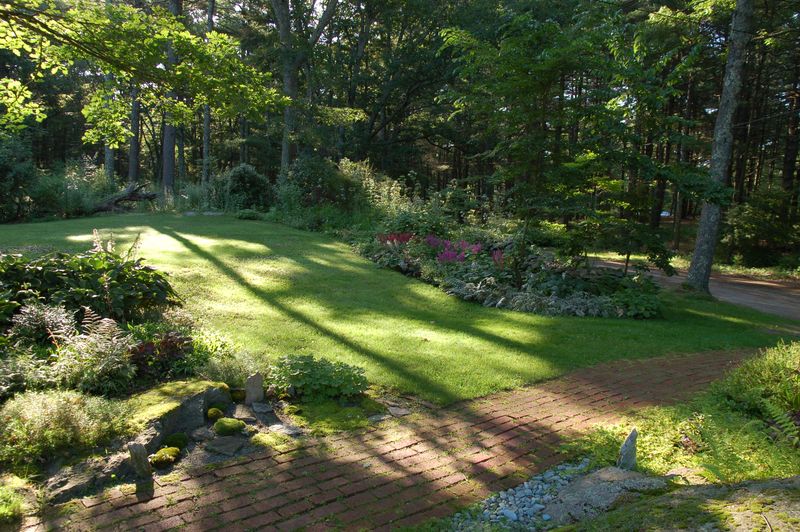 Sure, the blooms last a while but by July 11th, the color on these will have faded especially if the hot weather continues. 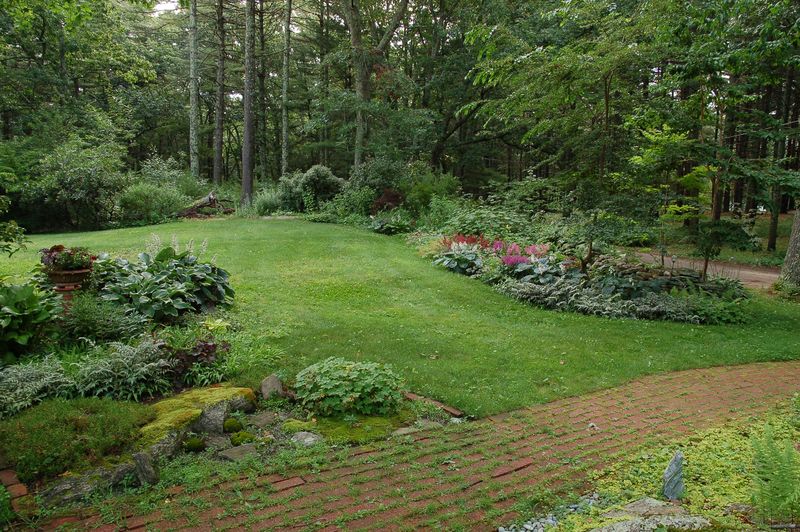 I am also having to contend with more weeds which seem to be running rampant as evidenced by the walkway in the above shot taken just today.   The coneflowers are just coming into bloom 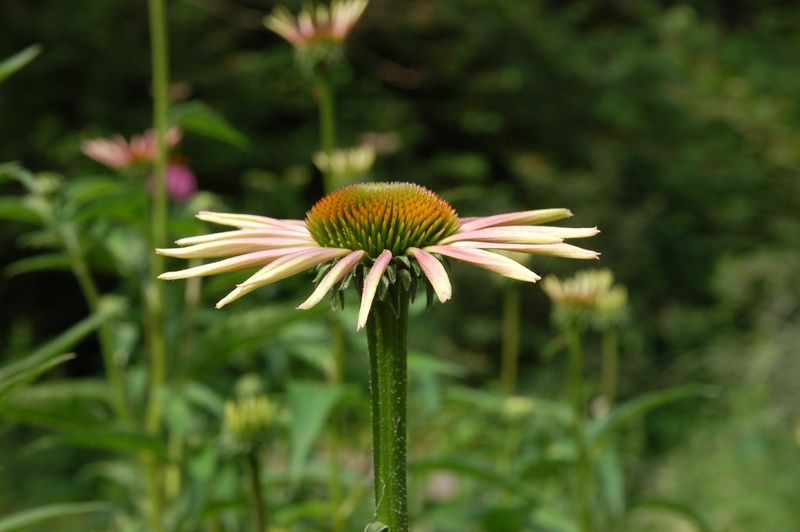 and the Persicaria polymorpha 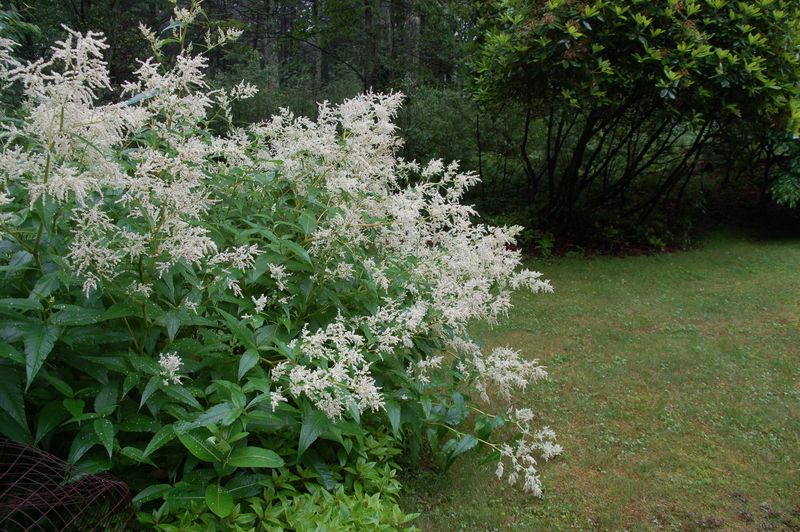 is already dropping petals. The long border looked like this 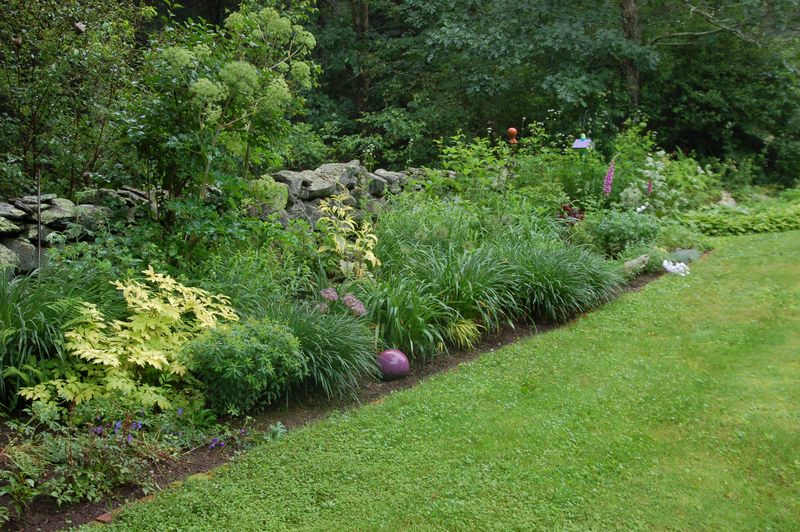 last June and this June it looks a bit fuller. 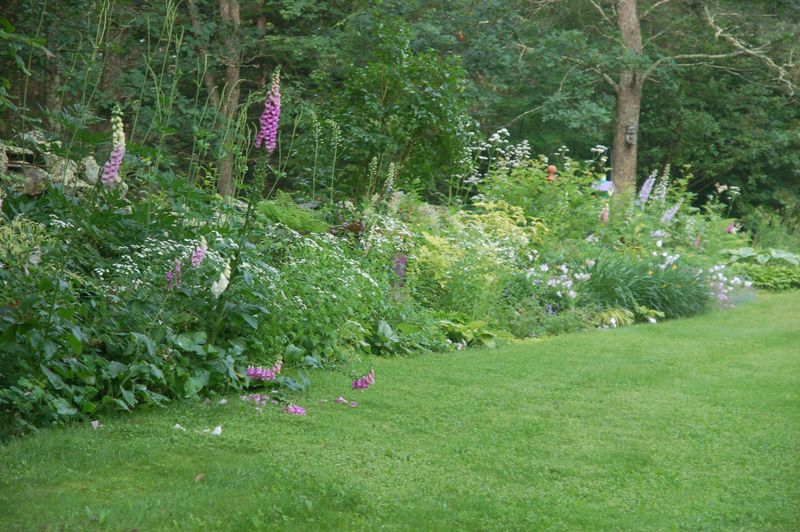 These were taken on the same day of the year, one year apart.  We did have hot, sticky humidity and temperatures in the 90's the last two days and both push the flowers into an early grave.  Many gardening friends have mentioned to me that their plants are larger and fuller this season than in past years.  We did have some warm weather early in the season which was followed by cooler temperatures.  I would suggest that the early warmth heated the ground just a bit more quickly than in past years which allowed the roots of many perennials to start growing a bit earlier than usual.  Whatever the reason,  borders are full and lush and while it may seem to be the height of summer, summer has barely begun.  It begs the question, what is in store for August here in New England?  Has it been a normal season in your area? 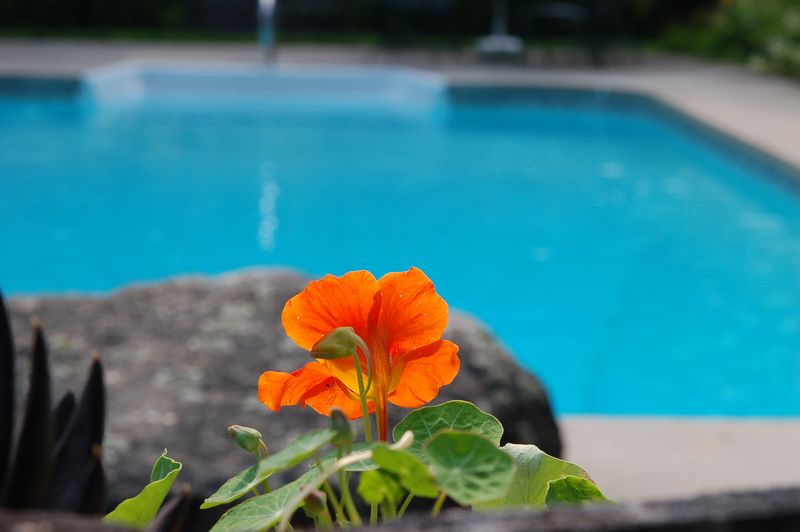 Hydrangeas can make one blue 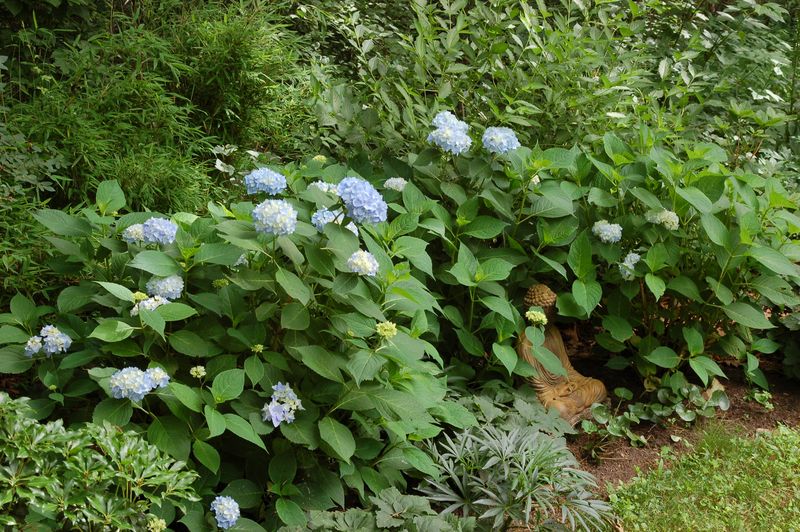 I recently read an excerpt from Allen Lacy's book, Home Ground, which is a compilation of delightful essays expounding on his horticultural experience.  It is a wonderful book much in the fashion of Henry Mitchell's On Gardening.  The title of this particular essay is 'Plumbago Blue' and Mr. Lacy states,

"Among the considerable numbers of things that separate Southern gardens and gardeners from their counterparts in colder regions of the United States is the prevalence of blue plumbago." 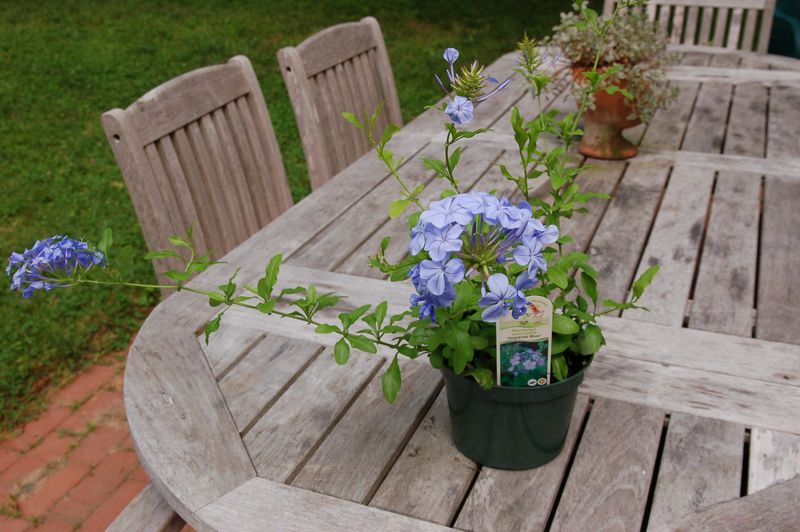 with the truest blue flowers imaginable.  Here in the New England garden, the substitute for this blue is the Hydrangea macrophylla which, until the introduction of 'Endless Summer', was a disappointment for most of New England as the flower buds are not winter hardy west of those areas of moderating coastal temperatures.  As we all flocked to the summer shore and witnessed the brilliant, bold blue of those hydrangeas, 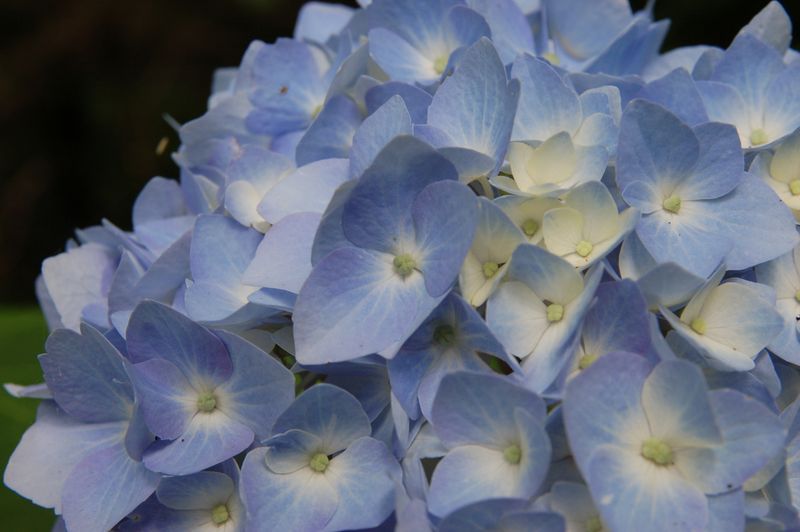 many of us purchased these shrubs from local nurseries with the promise of blue.  Many of us were often disappointed as these shrubs would leaf out with abundance but fail to flower most seasons.  I say most seasons because every few years there would be a slightly warmer winter or enough snow cover to protect the tender flower buds and the blue flowers would arrive albeit sporadically.  This just added to the confusion of the novice gardener or non-gardener who planted these shrubs.  Why the flowering some years and not others they would ask themselves not understanding the tenderness of the flower buds.  A hydrangea which does not flower is a coarse, uninteresting blob in the border.   Enter Hydrangea macrophylla 'Endless Summer'.  Blooming on new wood, these shrubs produce new flower buds in the spring. 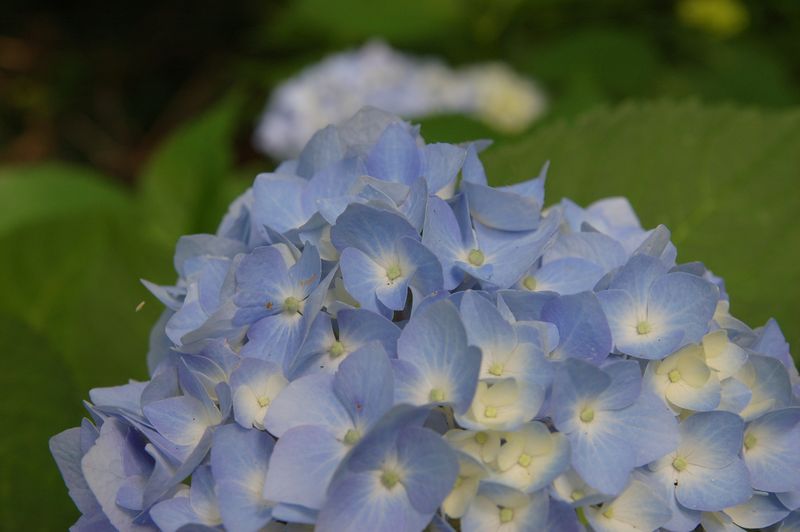 This year is an early, banner year for blooms and there will be many a red, white and blue flower arrangement on the Fourth of July table this year as the hydrangeas come into full bloom.  Mine are planted in a border which is really in too much shade for optimal flowering.  They are still blooming though and as most gardeners know, true blue is a coveted color for the garden.  The Texans have their bluebonnets, the Southerners have their blue plumago 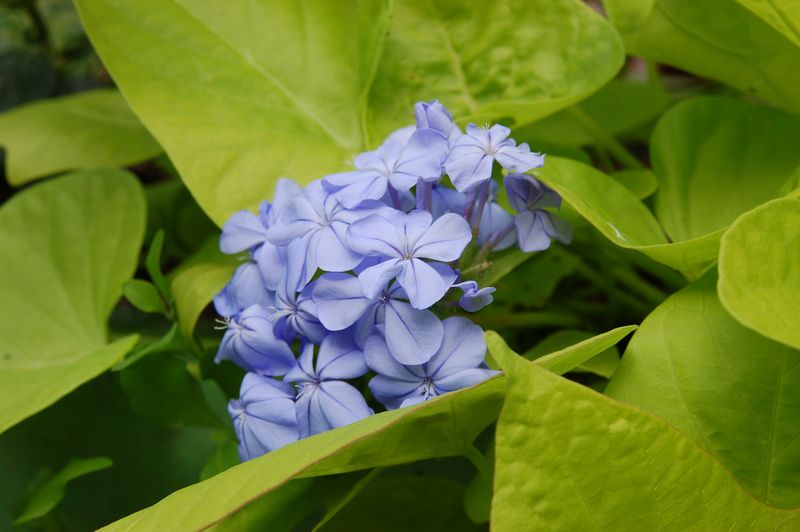 and we in the north now, consistently, have blue hydrangeas.    I should also mention that due to Mr. Lacy's high praise of his blue plumbago, I recently picked one up to use in a container planting.  I am admiring its' blue, phlox like flowers with their dark veining. 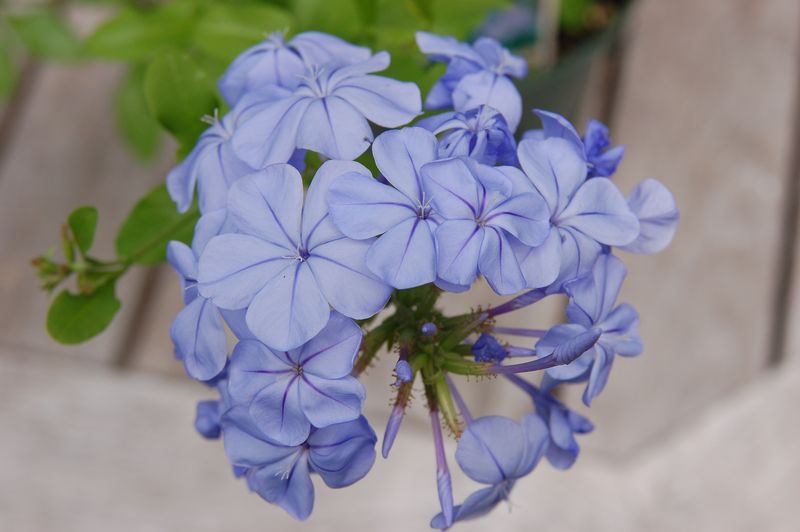 What blue do you have in your garden?  Not purple, true blue. 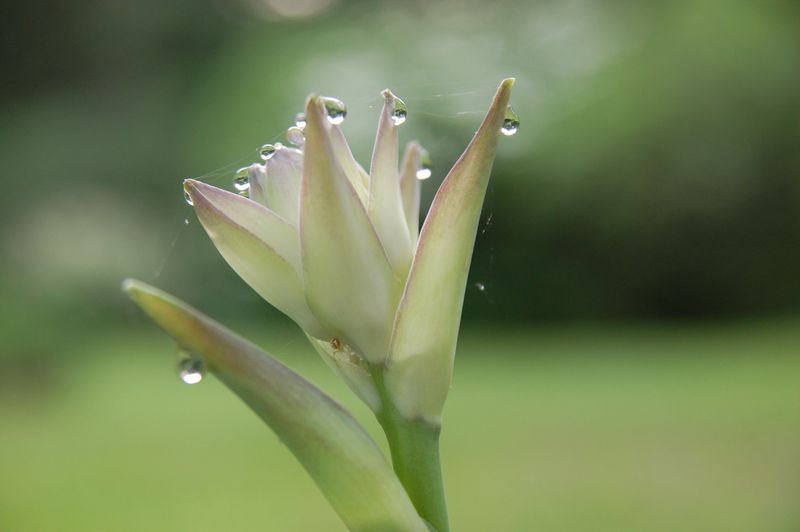 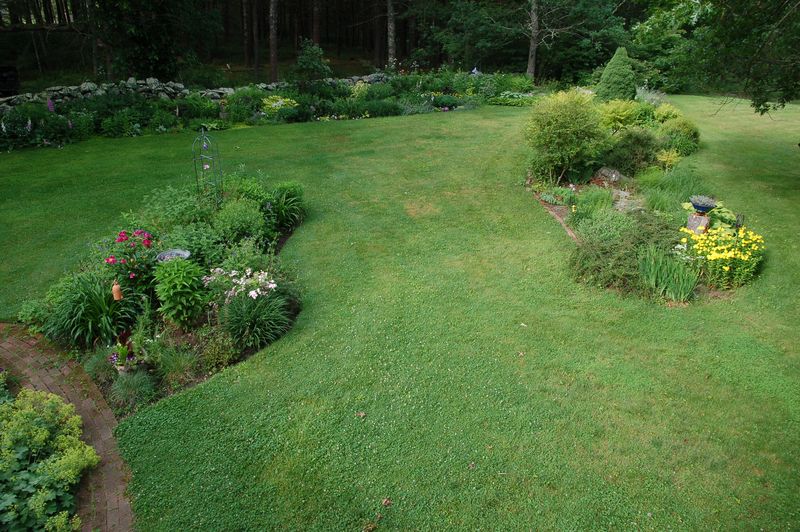 There is great satisfaction in the New England garden in June.  It really doesn't matter what kind of gardener you are, one with many perennial borders, one with a large vegetable garden, one with a small courtyard, or one with just a few containers. 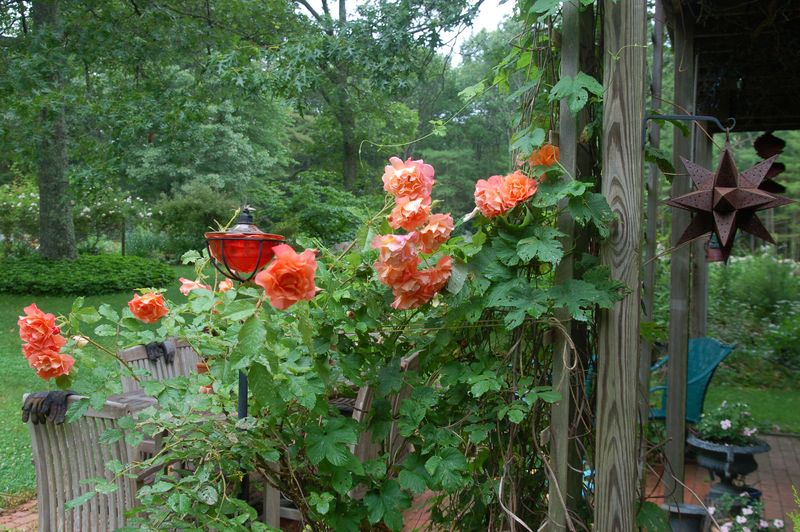 June is THE month of flowers here and the most difficult garden task is just sitting back for a moment and enjoying the beauty.  Forget the weeds which are still sprouting at a record pace.  Forget the constant encroachment of grass into the borders.  Just grab that cup of coffee, tea or your choice nectar and sip it in full view of the garden you have helped nature create.  As the season progresses and flowers bloom and fade the garden does change and while there may be other days which are as fresh and floriferous as those of June, there are rarely better days.

July usually approaches, stingy with moisture and as August rolls in, the humidity increases and the vigor of the season is gone.  Every region has its' peak.  I am always surprised and delighted to read of the beauty and freshness of Austin gardens in the springtime (they are in full, hot summer right now)  and there are those who dream of the perfection of the garden in May.   It matters not where you garden, each Eden has its' own seasonal peak.  Today, wherever you are, New England or not, remember to breathe deeply and enjoy the view.  It is such a transient one.
Layanee 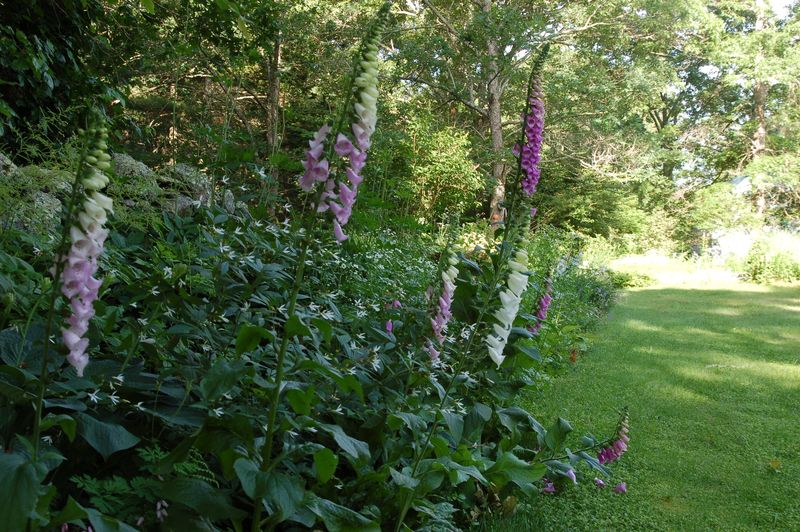 This has been a year for foxglove in my New England garden.  Perhaps the excessive moisture of last year's pseudo-summer increased seed germination of this biennial.  I have found it blooming in areas where I haven't seen or planted it in several years.  It has shown up along the roadside garden 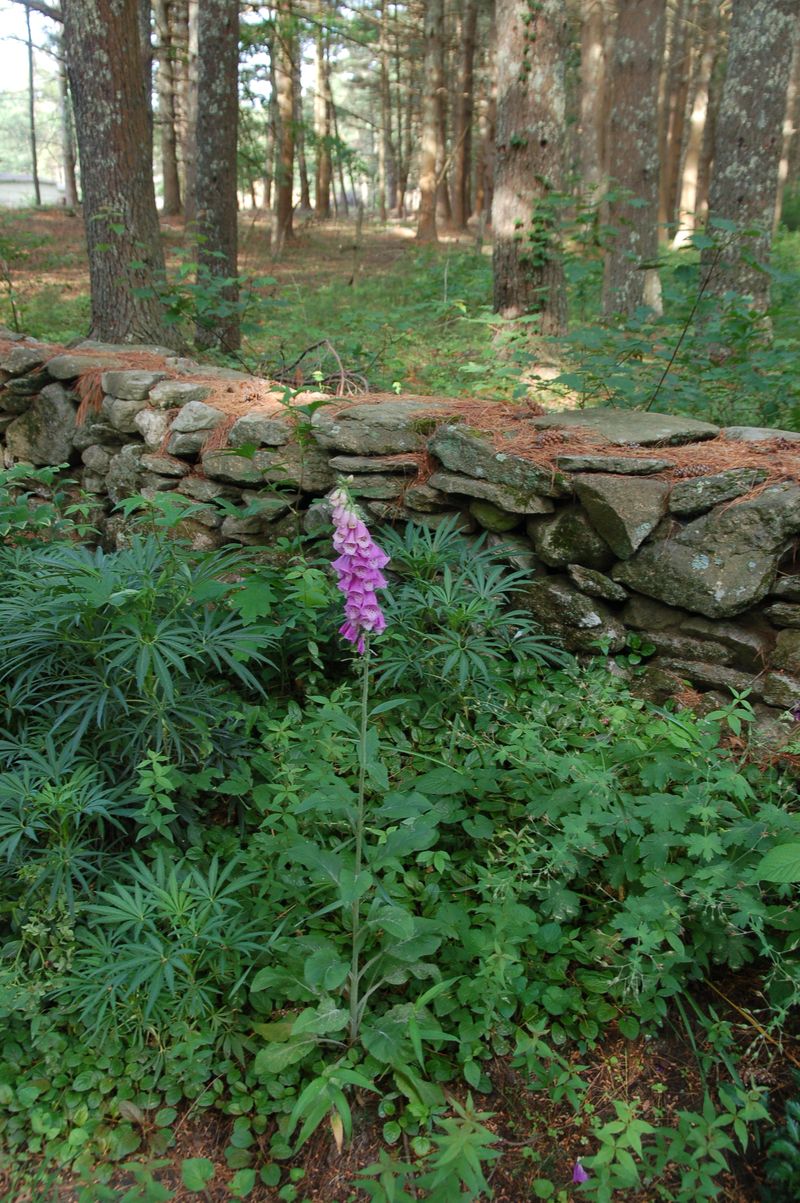 probably the seed was carried in the soil of some transplanted neighboring plant.  It has shown up in the woods aka bosquet (borrowed from Blithewold) along the drive 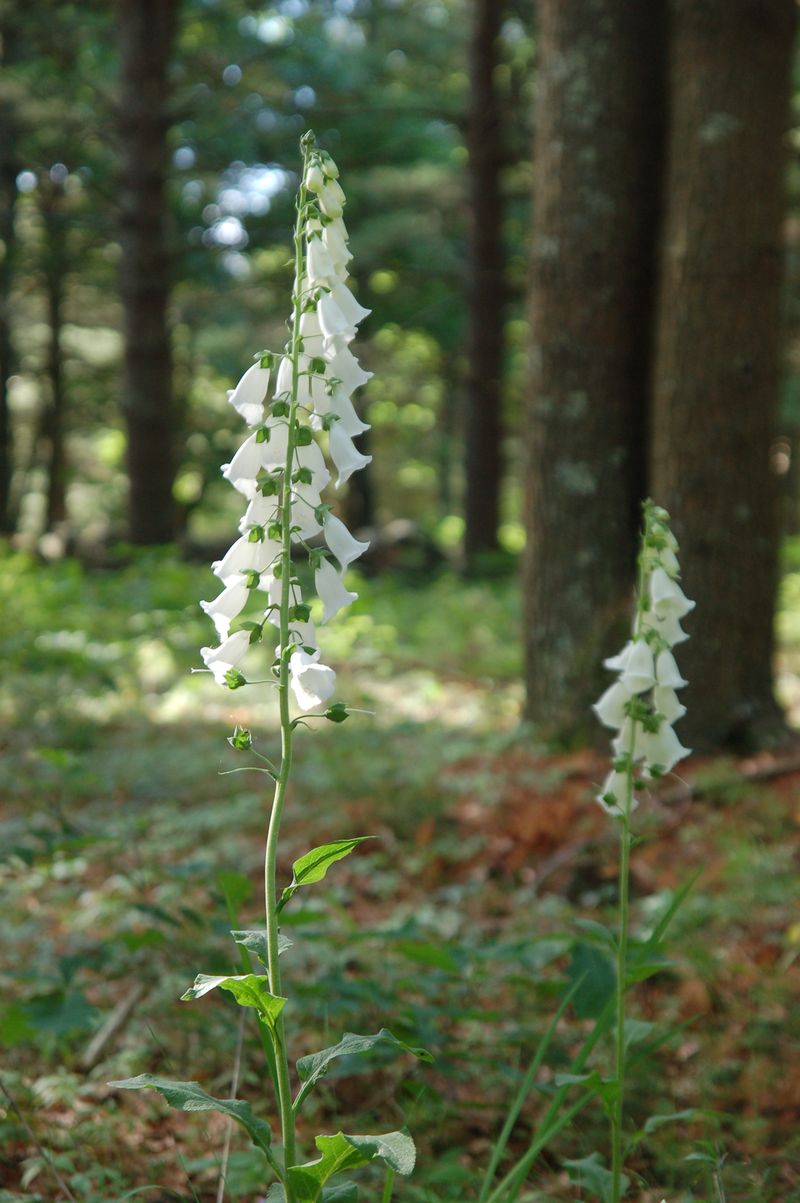 and it has shown up in the various perennial borders.
I have also seen it proliferating in others gardens although it could be that I am just looking for it a bit more this year.    I did have a quite frantic gardener ask me if breathing the spores could cause illness or death.  Perhaps this person meant pollen but in any case, there was real fear behind the question.  I do think if one is that afraid of a plant, even if it takes consciously eating the leaves to cause sickness and death, they should remove it from their garden. A garden should not be a source of stress. As for me,  I believe that walking out the door every morning is an act of faith and hope and the sight of blooming foxgloves simply gladdens my day. 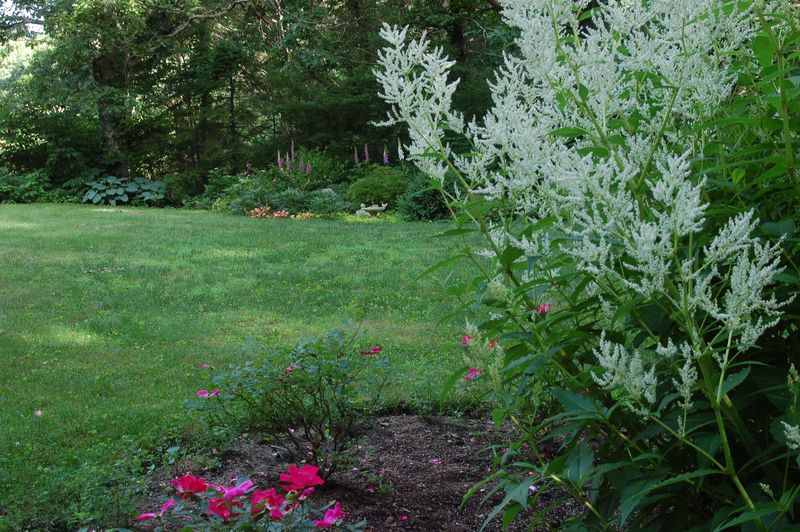 The common names ascribed to this plant such as the one above, dead man's bells, sounds particularly charming to me and I did not mention that name to the aforementioned frantic gardener.  Why cause further panic?  Witch's glove is another quaint common name and when googling that name one can actually find witch's gloves.  Many different kinds of witch's gloves. 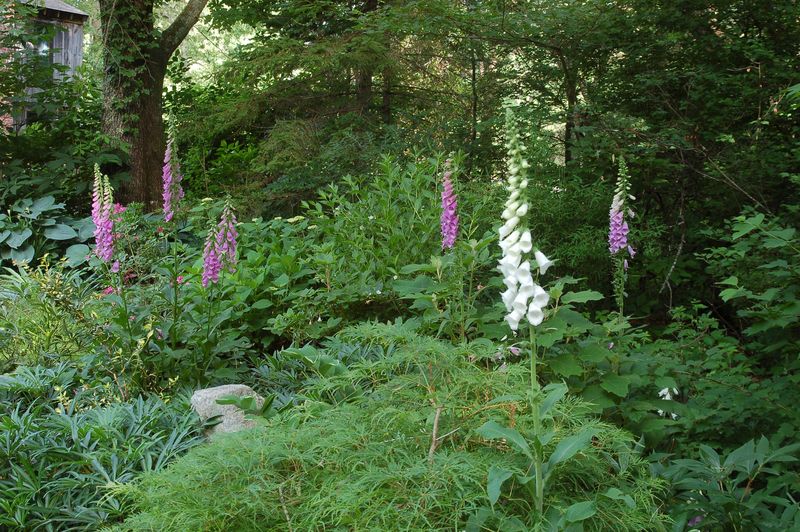 The foxgloves have arrived in an array of colors from deep pink through white.  The ballooning buds look so precise and neat all in a row. 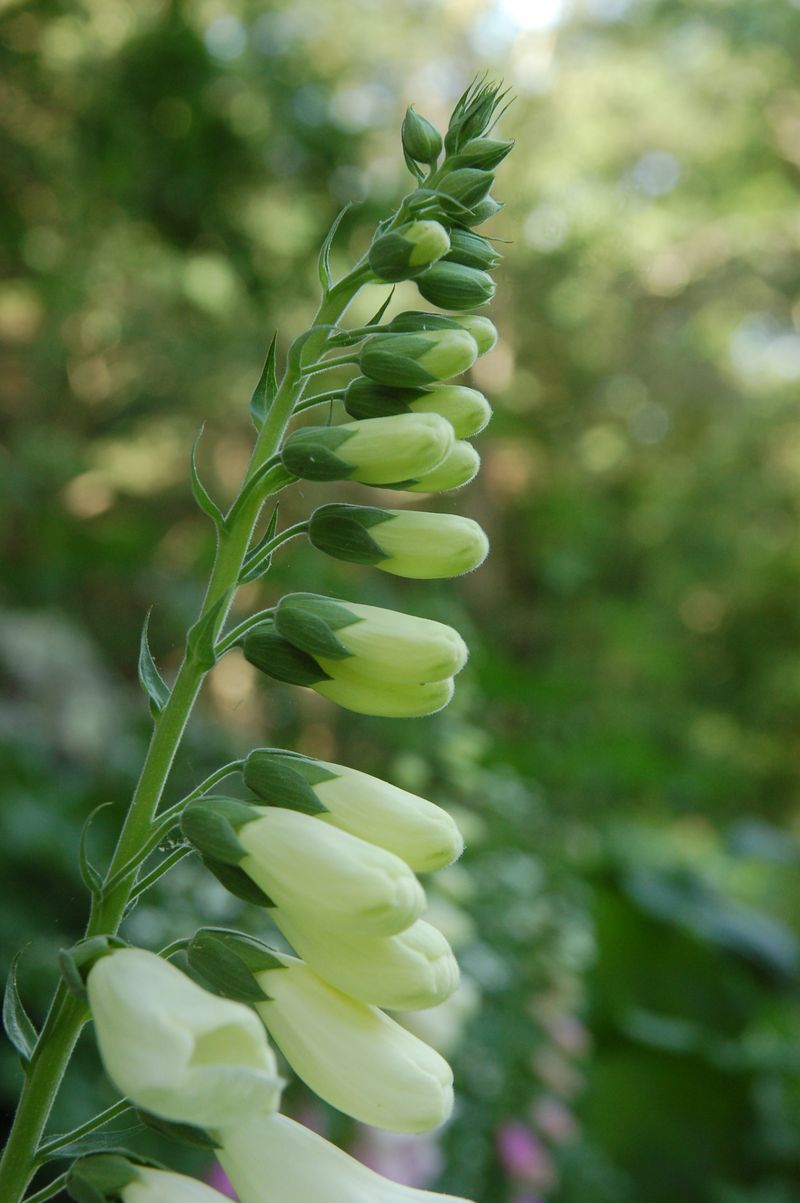 The spotted runway lights leading to the terminal must be appreciated and I did read that bees sometimes take refuge in the bells during heavy rain storms. 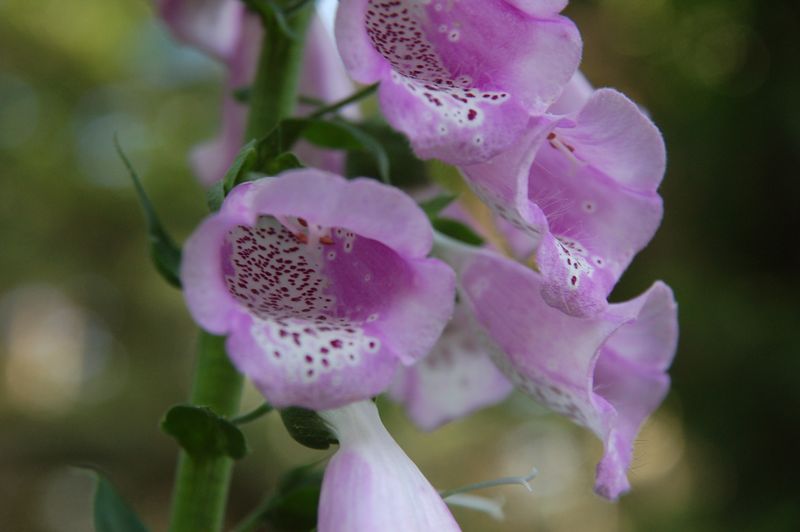 It is raining now and I am tempted to go out and check the flowers.   It should be noted that the foxglove rarely appear where they are wanted and often appear right in the very front of the border creating havoc with a planting design...or, do they?  I think they look quite all right in the front where I never would have planted them.  Nature is a grand teacher if we pay attention isn't she?
Layanee 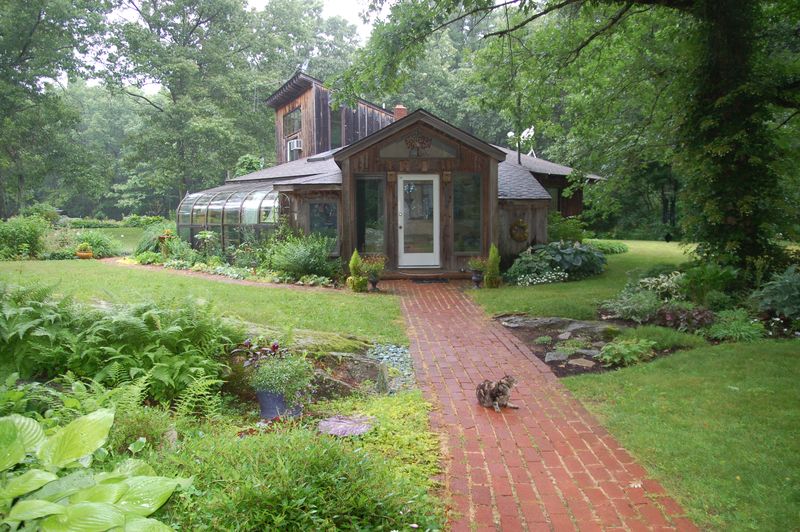 Mother Nature often has a hand in design.  The recent Rhode Island flooding in April caused the office to flood continuously until the rain stopped.  After the umpteenth removal of water from the sun room office, which is a step below grade, the EM and I discussed options. 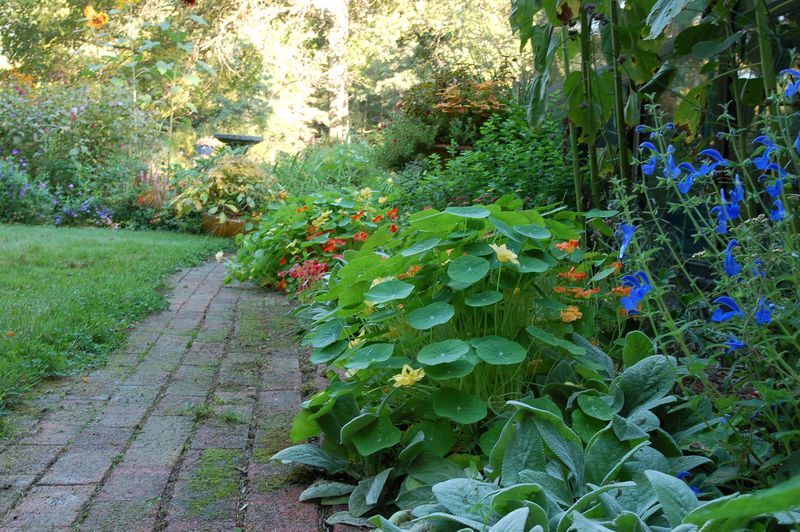 Ledge makes it difficult to work the earth, here at least, without large equipment and/or dynamite.  If you think I am kidding, the small basement we do have here necessitated blasting the ledge out of the area.  Tricky and not a task that we took on ourselves although men love dynamite.  The EM is handy at all things but he does not have a permit for blasting...much to his dismay I am sure.  So he mulled over the situation and it was decided that we would remove the soil from the front of the windows, replace it with pea stone, and add a bucket, hidden below grade, which could be accessed if when another rain incident  occurs.  The bucket will house a sump pump. 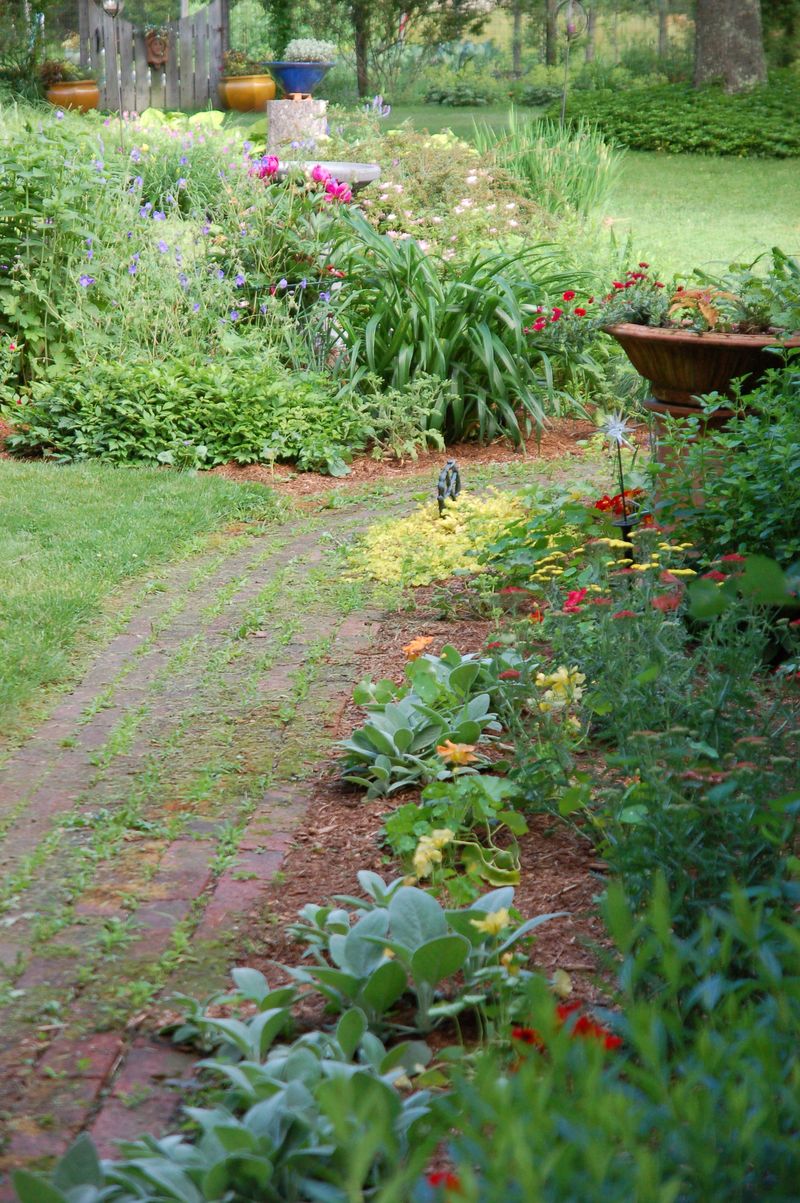 I hope we never use it but it is likely that we will have to do so. Removing a garden presents a clean slate. What does one do with pea stone?  Put containers on it, of course. 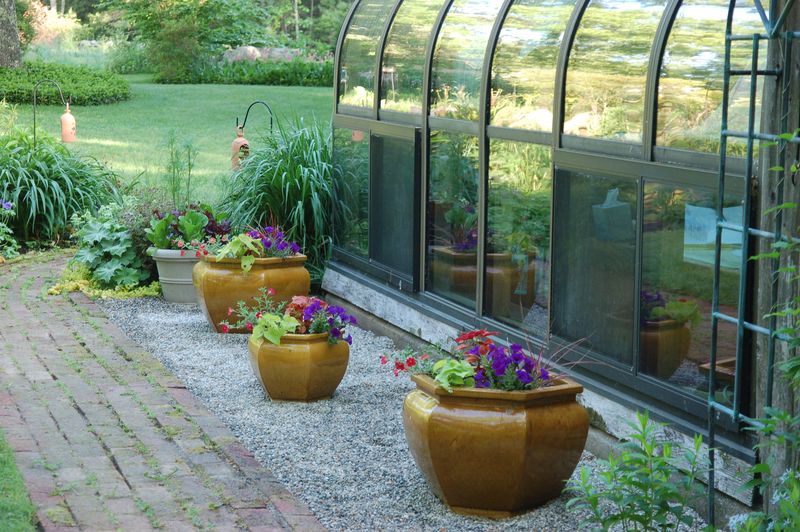 I am enjoying this new, clean look.  There is a weed barrier which should reduce that problem.  The plants are young and will fill in but there is no end to the options for future plantings. 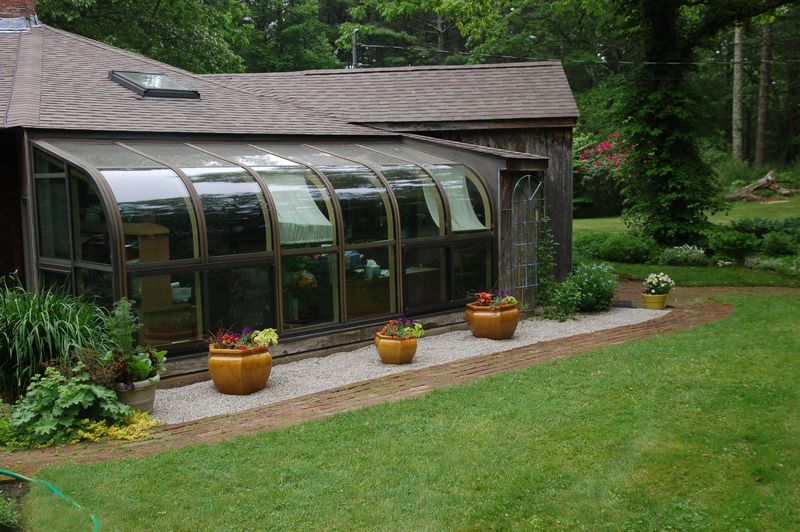 I am open to suggestions for next year, and comments, of course.
Layanee