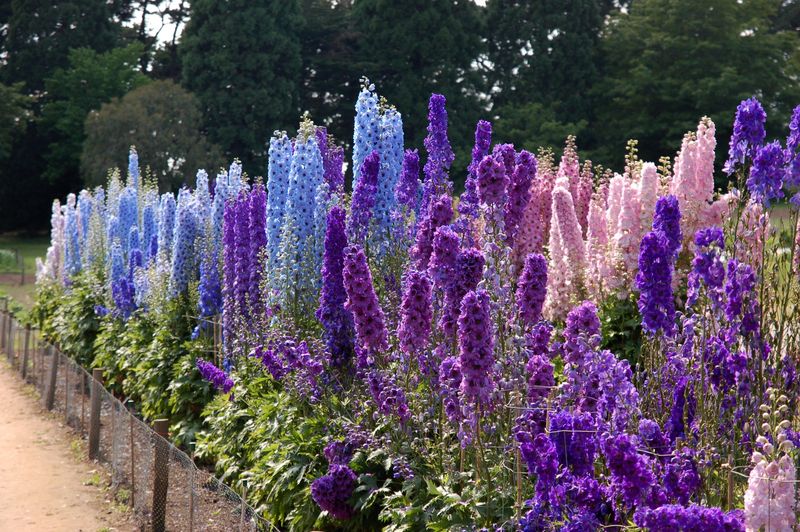 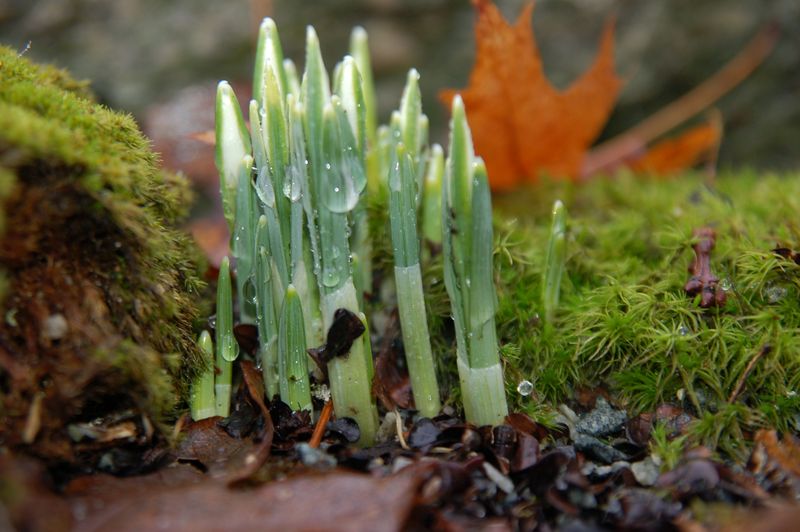 There was the definite feel of approaching spring this weekend.Temperatures were in the high 40's which feels like a heat wave after freezing rain, snow and just general cold.  It is only February still but the light levels are just so much higher than one month ago.  There is snow cover in all but the most south facing portions of the garden and I am seeing just a nudge of green here and there in the form of snowdrops and early crocus against the foundation's warmth. They are still sitting in suspended animation waiting for a row of warm days to send forth some actual color. 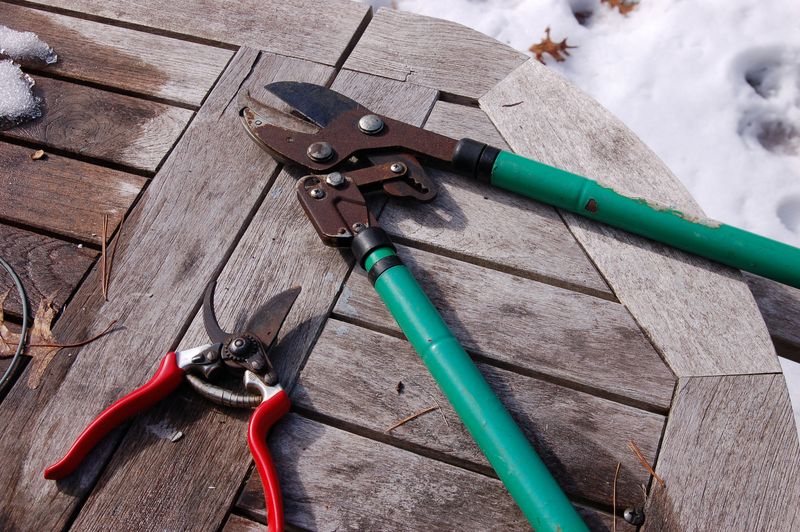 It was a beautiful, sunny day on Saturday and it necessitated sun glasses given the glare of sun and snow but it was a good day to prune a bit.  I usually prune the Hydrangea paniculata 'Limelight' and the Catalpa at this time of year as well as those understory cherries which pop up everywhere unannounced. I also cut a few stalks of perennials and adjusted the 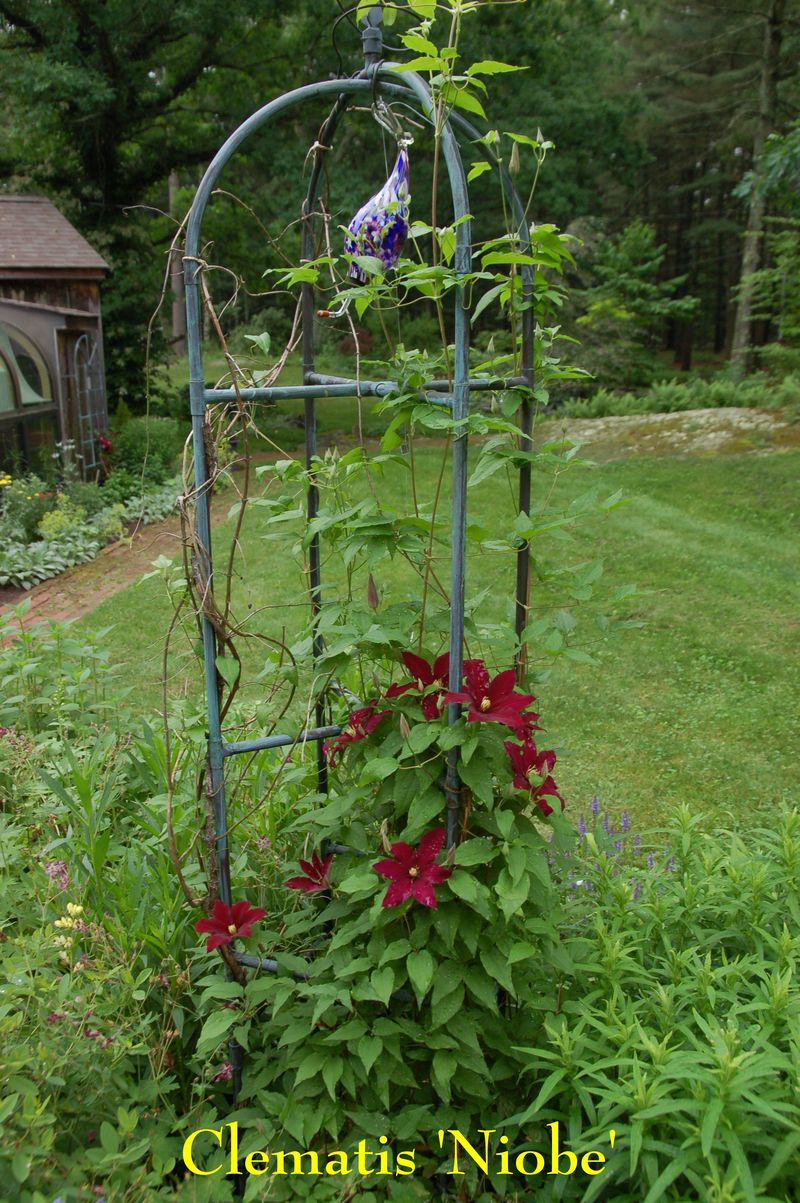 copper tuteur which was leaning in the garden from battling the weather.  It looks much better in the June picture than in the current picture. 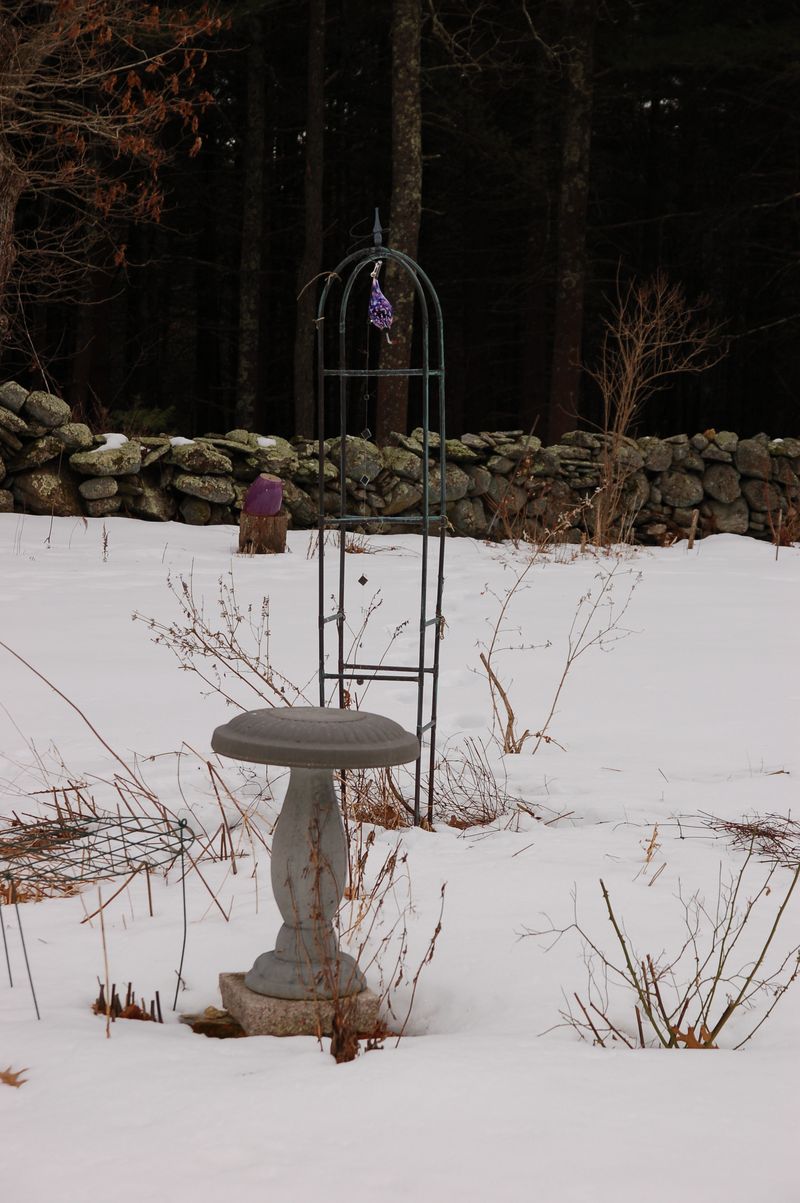 This is what the yard looks like right now. 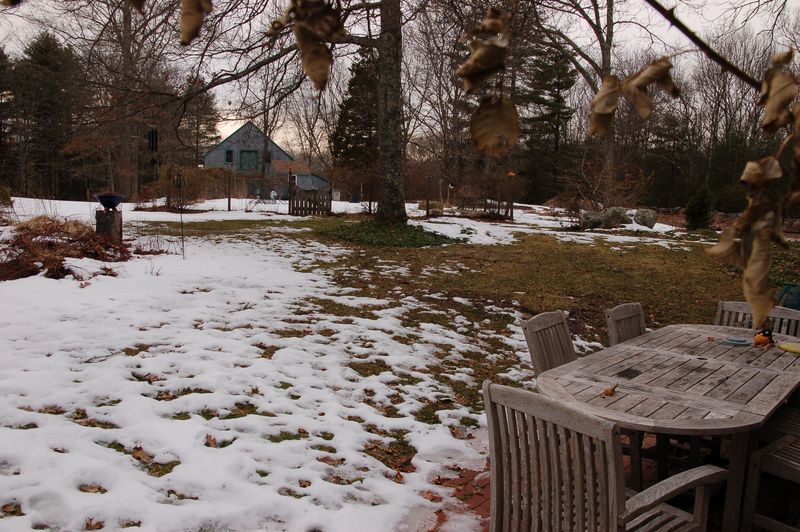 Given the appearance, there is no way I can call this a garden.  I am thinking that the burning of the grasses will be less than spectacular this year as 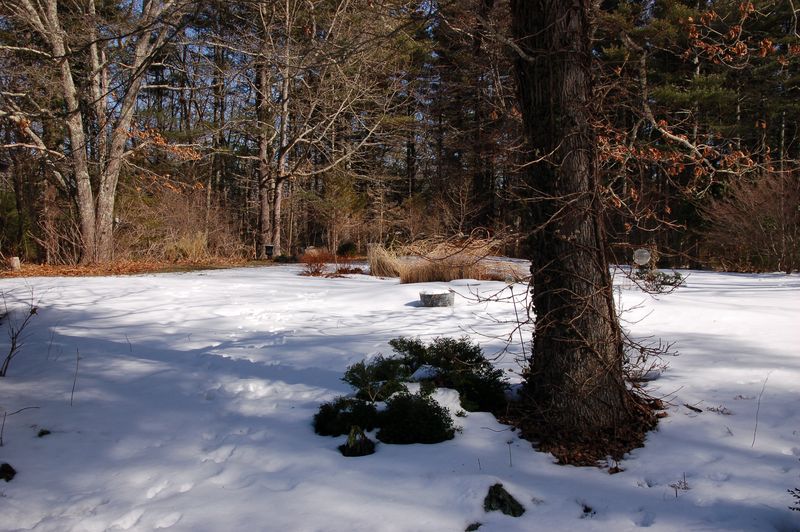 they have been beaten down by repeated winter weather.  The winter sowing of sweet peas was also accomplished on Saturday. This package contained a mystery bean.  I guess the gremlins added it to the package. 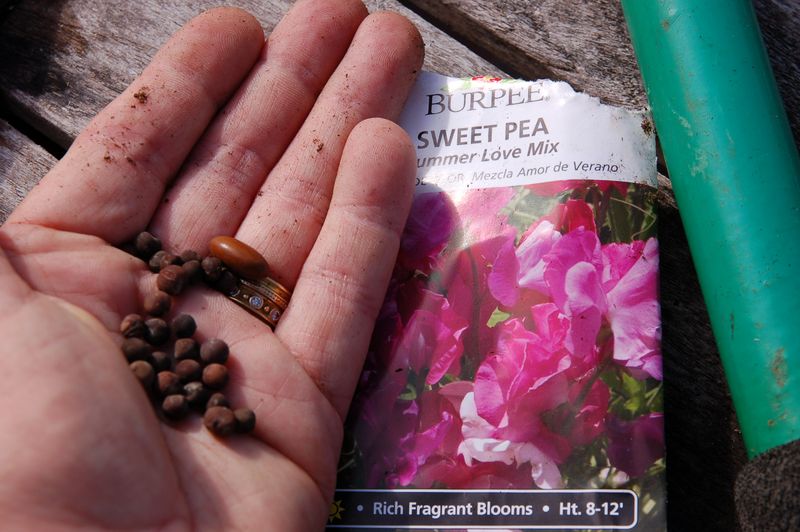 I usually plant them in the garden in April but it always seems to be too late.  I am trying the winter sowing method in peat pots. 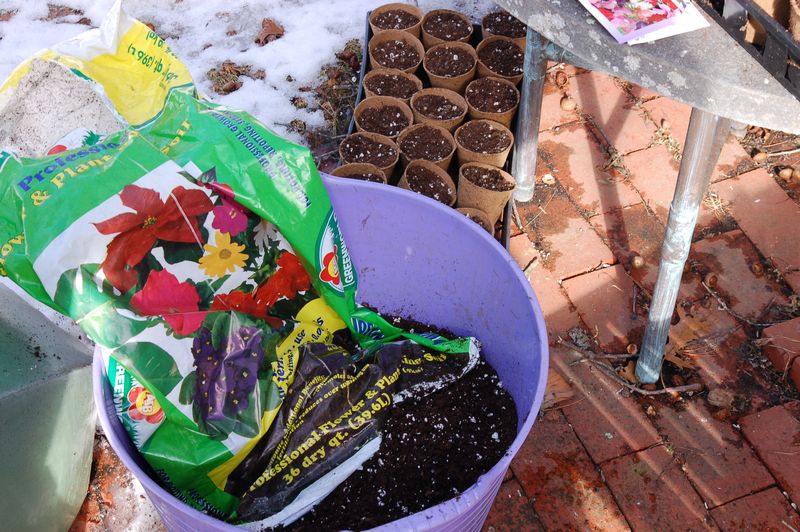 We shall see if this works.  Kris at Blithewold says that she and Gail always sow the sweet peas around President's Day although they keep theirs in a cool greenhouse.  I will move these to a cold frame once the snow is gone and it can be set up in the garden. 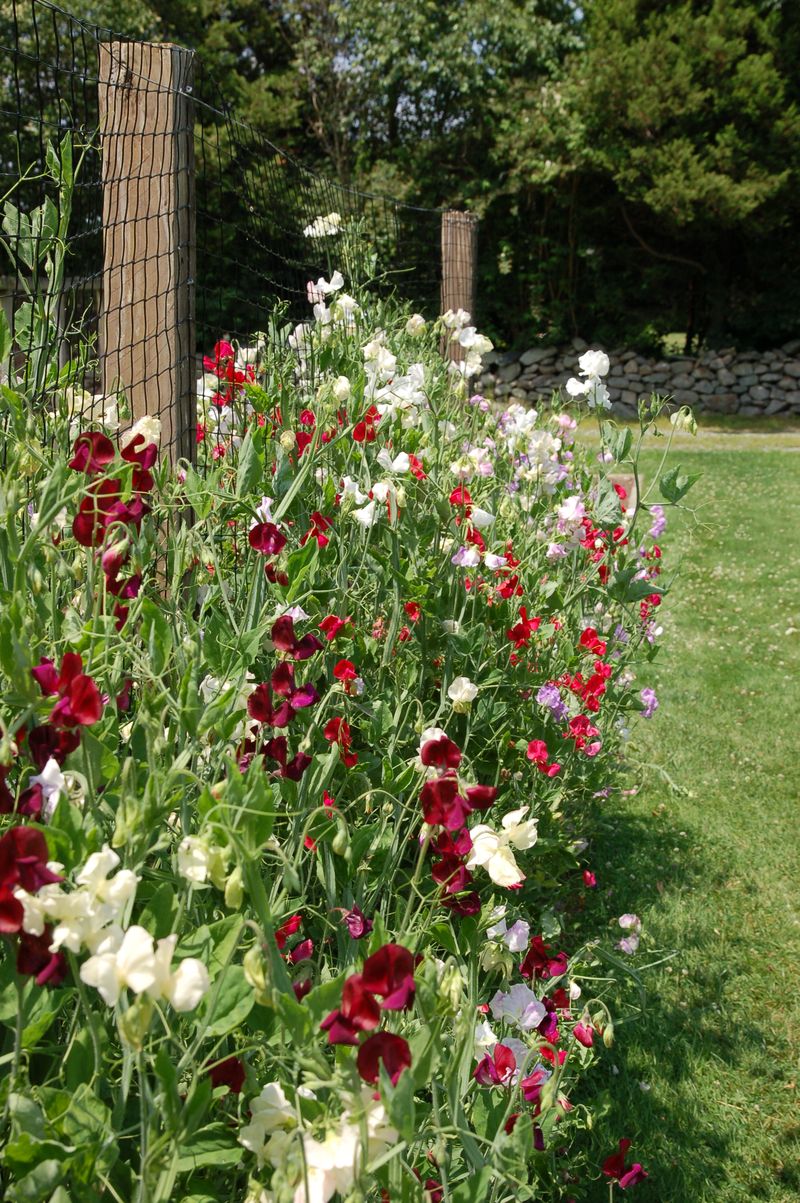 Here is a picture of the sweet peas planted out at Blithewold.  I visited one summer day and Kris generously picked me a bouquet. 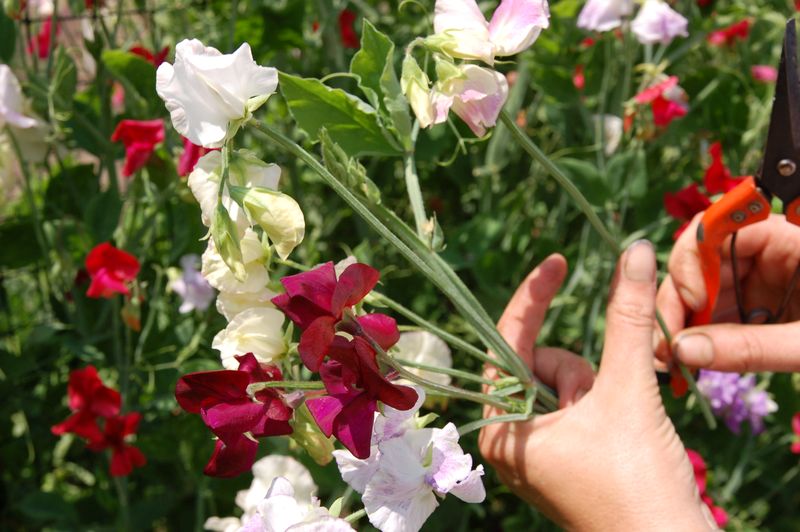 I will not soon forget that ride home in the car with the bouquet of sweet peas sharing its' ambrosial scent. 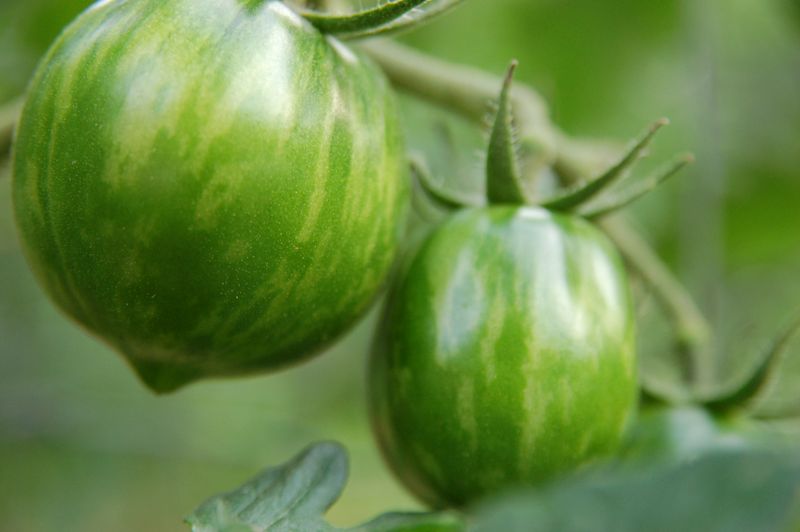 There is much discussion and writing by gardeners in this month of February concerning seeds and seed catalogs. The dreams of the next vegetable garden give way to seed orders and, soon, seed starting.  Choosing the correct varieties of this year's squash, cucumber or tomato is all important.  The disappointments of last year's crop are still fresh in one's mind but there is the knowledge borne of experience that this next season will be different.  Some crops will thrive and some will disappoint.  Last year's crop succumbed to late blight as did the tomato crops of many of my fellow New Englanders. 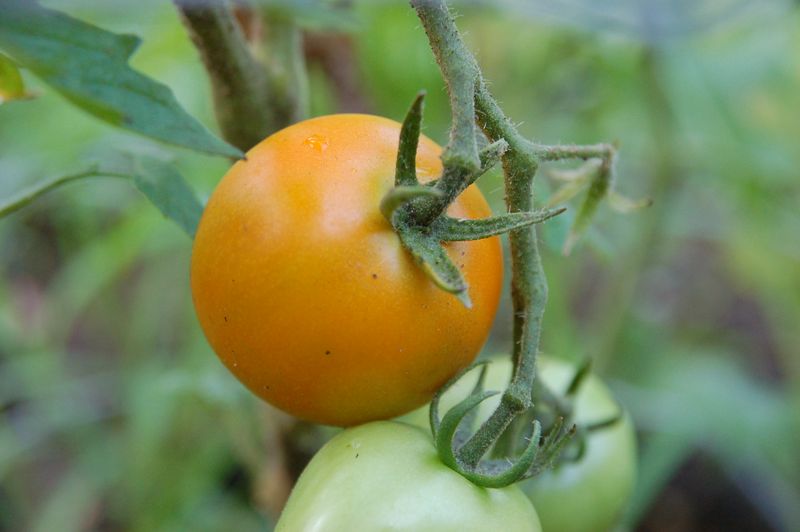 'Who knows' from 2009
I have commiserated with many others in my region who had a challenging gardening season in 2009.  It was cool and wet and most of the warm season crops were not up to their usual prolific performance.  I did enjoy fresh potatoes though and fortunately they did not contract the late blight.  Each season brings with it a unique set of conditions in the form of weather, insects and diseases.  No two seasons are alike.  I suspect that we will be in for a bit of dryness this coming season but, who knows.  For the past three seasons I have planted a wide variety of heirloom tomatoes.  I am cutting back on these.  I will still plant a few but I am going for quantity this year.  My first heirlooms were quite a disappointment.  They were pretty but they bore just a few fruit per plant and the flavor was not impressive.  I realize that my gardening skills will come into question here and perhaps rightly so but I have had success with tomatoes in the past in the years before 'heirlooms' were in vogue.  Ten years ago it was new hybrids which boasted disease resistance and greater productivity which caught the attention and purchasing power of gardeners.  There should be a balance. Don't most of us want both quality and quantity?  I do believe in  promoting genetic diversity and saving heirlooms.  Again, balance is called for and it will be implemented in this next garden.  Who has the time or space to plant that which is less than productive? This picture represents a good portion of the 2009 crop.  See Tucker's expression?  He is less than impressed.   It is diverse group.  I will plant 'Green Zebra' again.  It is juicy,tart, and a good conversation piece with it's broad bands of green stripes. 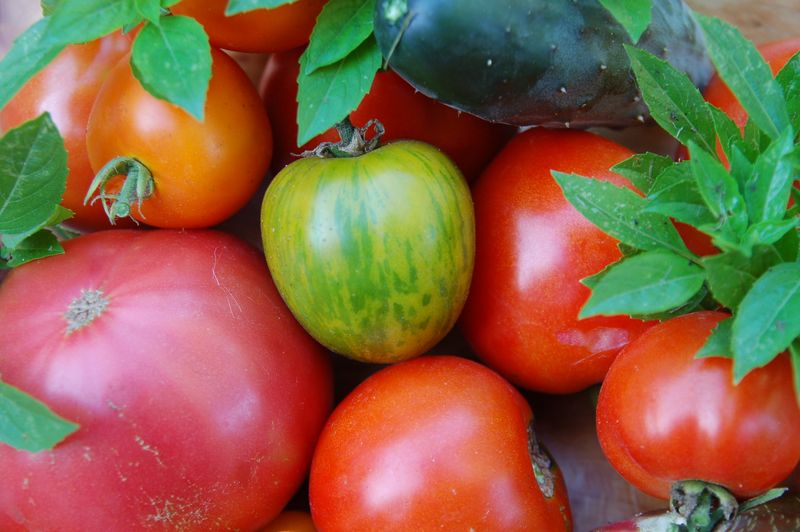 I will plant 'Sungold' and 'Mortgage Lifter'.  'Mortgage Lifter'  is huge, pinkish red and one slice makes a sandwich.  I am just not impressed with 'Black Krim', 'Brandywine', 'Cherokee Purple' or some of the other varieties I have tried.  They just do not produce a lot of fruit and I qualify that by adding 'in my experience'. 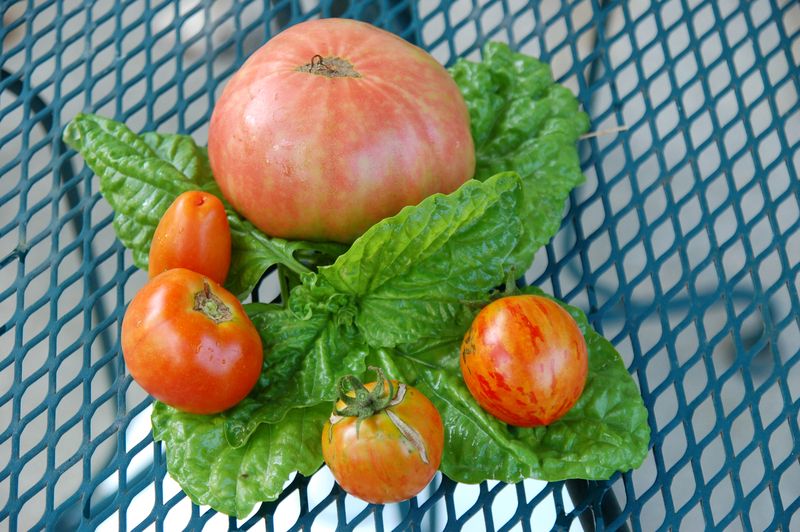 In addition, the taste is 'Ho Hum'.  I actually am starting to believe that tomatoes respond to specific soil characteristics just as grapes respond to the soil in which they are grown. 'Terroir' .  I am sure all my tomatoes' flavors are a direct result of 'terroir'.   It is either that or the difference in taste buds from gardener to gardener that explain the claims by some gardeners of superior flavor of the above mentioned varieties.  After a bit of research, I have ordered 'Early Girl', the old standby, which is early and prolific, 'Glory' which is a hybrid of two old heirloom tomatoes which claim thin skin and abundant fruit set, and 'Legend' which is early and resistant to late blight.   I would love to hear what your experience has been with tomatoes, terroir, and abundance.  I am open to your suggestions as to your favorite varieties.

To all, this heart's for you. 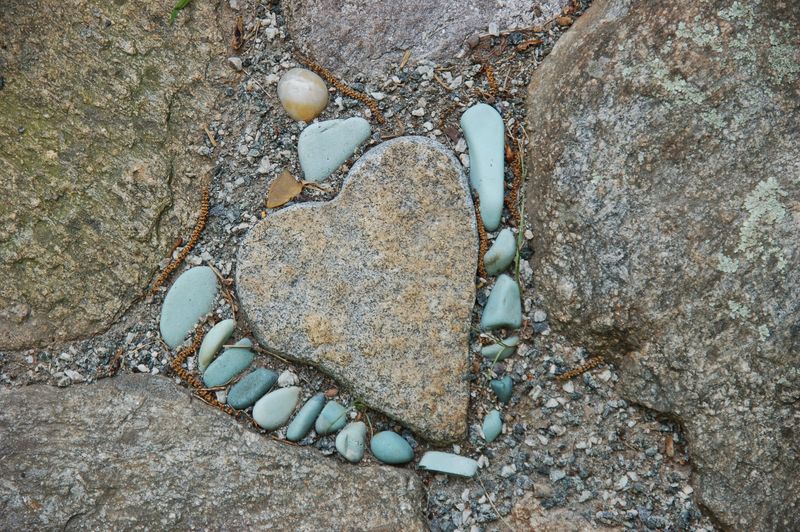 It may look cold but this was taken in June so, fear not.  Have a great day! 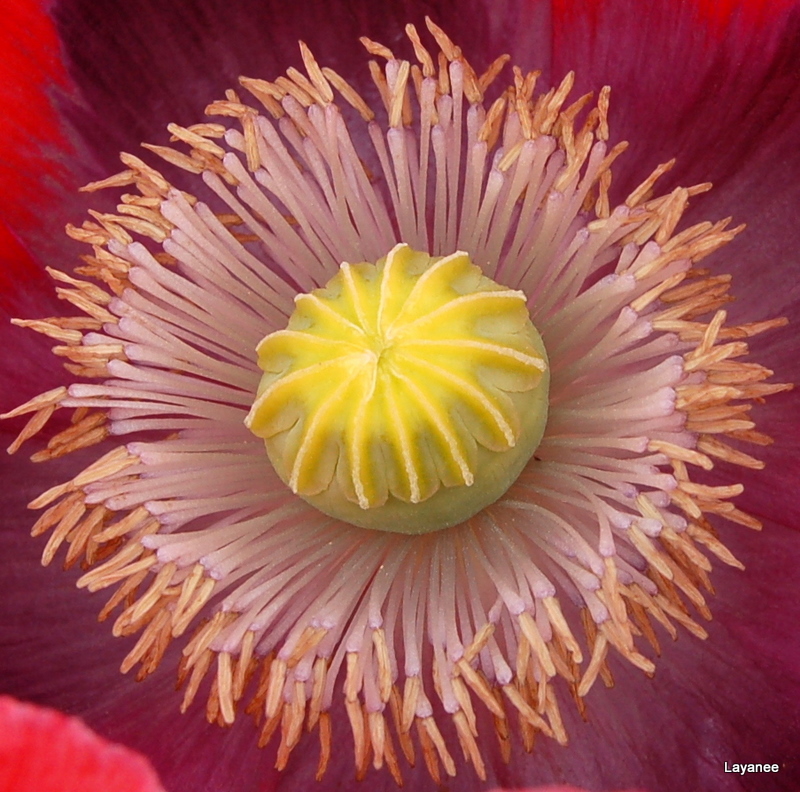 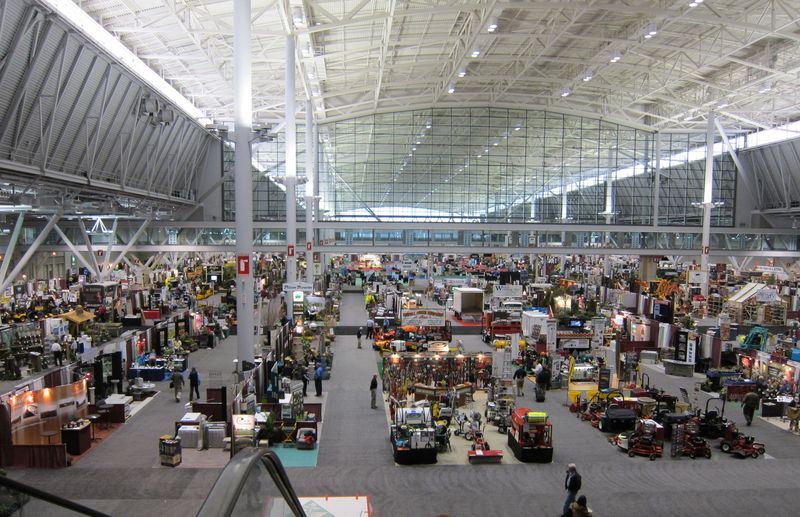 No, I am not boycotting February. Sometimes work gets in the way of blogging and sharing the latest gardening items with fellow bloggers is always a pleasure.  What is new for 2010?  I didn't see too much in evidence at this year's Grows Show in Boston.  There are a couple reasons for this.  The first is that time is required in the booths in which one is exhibiting so there is limited time to check out other vendors.  The other is that the New England Grows Show has become a show devoted to landscapers and arborists rather than garden centers so there is more equipment such as chain saws and tractors than new garden items.  You will hear that attendance was up.  You will hear that there were an equal number of booths to last year.  The truth is that attendance my be up. I spoke with dozens of Agriculture students. 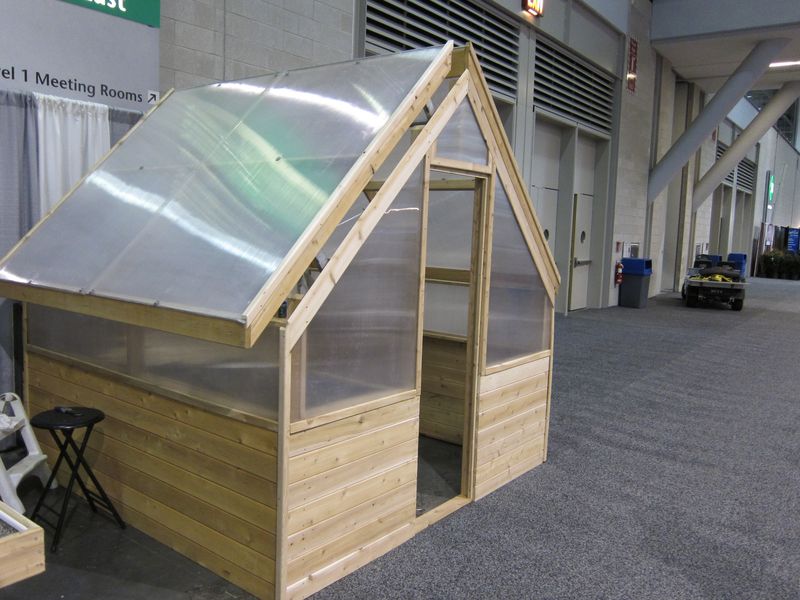 This is good but they do not buy.  They are future customers.  I did see many booths hosting Associations such as the Massachusetts Nursery and Landscape Association.  Also good.  They don't buy product either but support their membership and recruit new members.  There were many of my customers, the garden center buyers, who did not go to the show because they have already done their buying in October and November at the Distributor Shows.   Many of my customers have a Landscape Division and they are exhibitors at this show.  New England does need a trade show for garden centers and this show is failing them.  Most of the buying for garden centers occurs in the fall when there are early order programs and extended dating programs.  Neither of these options are available in February.   The success of a show lies in the numbers of orders written by the vendors not just in the number of attendees.  A vendor must cover costs and gain enough business to offset the show expenses.  The expense of this show, in comparison to the Mid Atlantic, MANTS, and CENTS, or Central trade show is exorbitant and much of the reason for that lies in the hands of the labor unions controlling the docks.  A vendor is charged for everything and is not allowed to even bring in an upright carrier although we cheat if we can. 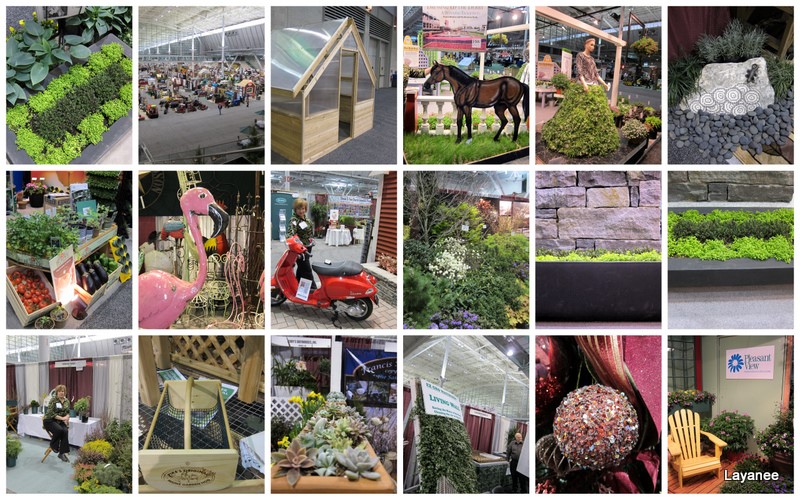 I expect to see even fewer garden center owners at this show next  year.  The only incentive for garden center personnel to go to this show is to attend the seminars to gain the necessary pesticide credits.  Well, that and seeing the big equipment.  Without the vendors paying the way for the seminars, there will be fewer available.  I think my attendance at this trade show is coming to a close. Two of my vendors have reduced booth space from four booths down to two and two vendors have pulled out of the show.  That leaves two with one booth each and very few orders written.

This is not my usual post.  I know this is a rant.  I feel I should apologize but it helps to rant doesn't it?